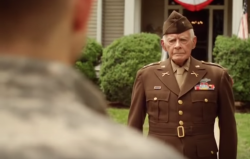 Food City is a Southern grocery store chain with headquarters in Bristol, Tennessee.   This is their one-minute commercial.  Not a word is spoken and none is needed. Very few commercials deserve to go viral  This one does.   https://www.youtube.com/embed/ uoABty_zE00?rel=0

Often when we're putting a story together, readers will send a video of their invention or idea.  We've always put a few of those on our website.  Lately, we've been loading many more into our "FARM SHOW Magazine" YouTube channel.  Check 'em out and subscribe so you don't miss any! https://www.youtube.com/user/FarmshowMagazine 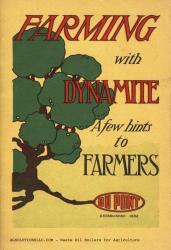 As an elementary-age farm kid, my dads directions were often simple phrases like do this, start that, grab this, hold on or stay out of the way. It was around then I heard a new phrase when an old Chevy sedan rolled into our yard.  Go help Ben, were the directions. Help him what? I asked, and the response was, Whatever he needs, and be careful.

Ben was my dads cousin, a sturdy red-faced guy with gray hair, a gruff voice, a big stogie in his mouth and a friendly smile.  Junior, he called as I walked to his car, get in here and hold onto these.

I jumped into the passenger seat and he placed two bags of what looked like rifle cartridges connected to baling twine on my lap.  Dont shake the bag, he said as we sped do ...

Why Men Are Happier Than Women

Your last name doesnt change. The garage is all yours. Wedding plans take care of themselves. Chocolate is just another snack. You can never be pregnant. You can wear a white T-shirt to a water park. You can wear NO shirt to a water park. Car mechanics tell you the truth. The world is your urinal. You never have to drive to another gas station restroom because this one is just too icky. You don't have to stop and think of which way to turn a nut on a bolt. Same work, more pay. Wrinkles add character. Her wedding dress - $5000. Your rented tux - $100. The occasional well-rendered belch is practically expected. New shoes don't cut, blister, or mangle your feet. One mood all the time.

Phone conversations are over in 30 seconds flat ...

I havent lost my temper.

I havent been greedy, grumpy, nasty, or self-centered.

Im really glad about that.

But in a few minutes, God, Im going to need a lot of help.

Have you checked out FARM SHOW's Facebook page?  More than 50,000 like-minded folks follow the page.  Besides stories and videos, there are special offers and FARM SHOW groups you can join. Give it a look! https://www.facebook.com/FARMSHOWMagazine

A doctor examining Lena, who was rushed to the emergency room, took her husband, Ole, aside and said, I dont like the looks of your wife at all.

One day a mailman was greeted by Little Ole and a huge dog.  The mailman said to Little Ole, Does your dog bite?

No, replied little Ole.  Just then the dog bit the mailman.  He yelled, I thought your dog doesnt bite!

Ole drove into a lumber yard in his pickup.  I vould like a bunch of 4 by 2s, he told the lumberman.

How long do you need them? asked the lumberman.

A Little About My Grandpa 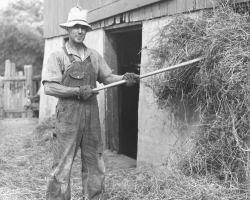 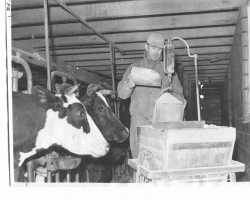 My grandfather, Stanley Newhall, was born in 1889 on a dairy farm near Owatonna, Minn.  He died on that same farm 89 years later.  He was one of the first farmers in his area to get milking machines, thanks to the coming of rural electric power in the 1920s.  He was also something of an inventor who was featured several times in various publications over the years.

My 92-year-old father, Bill Newhall,  has spent a lot of time organizing old family photos.  He recently came across the photos above that appeared in national farm magazines.   My grandfather had a lot of made it myself equipment around his place that often caught the eyes of farm magazine editors.  I like to think we would have featured a few of them in FARM SHOW if the magazine had been around during his day.

An interesting fellow from Wisconsin stopped by our office the other day.  Among other things, Curt Forde of Profit Organics is the inventor of a new add-on product for cultivators. Weve sold Flow Shields to farmers all over the country since you featured them this winter in the 2015 Best of FARM SHOW. Theres tremendous interest in this new method of cultivation, which lets you double your speed without damaging crops, says Forde.

This is a product that allows organic farming in a big way because you can cultivate at high speeds without the need for chemicals.  Big conventional farmers can drop chemicals and no longer worry about chemical-resistant weeds.  Ive never seen a weed thats resistant to a cultivator shovel.

Forde came up with the idea while cultivating corn that was 6 to 8 in. tall.  Large chunks of soil were wiping out plants.  He went to the shop and made the first Flow-Shield ...

New Issue Off The Press! 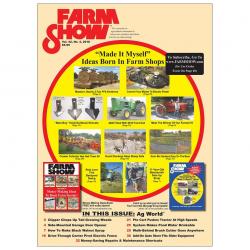 The July-August issue is off the press and going into the mail.  It takes two months for our writers and editors to put each issue together, as we search across the U.S. and Canada for new ideas born in farm shops.
If you've got an idea you think we should feature, submit it here at the website or send to us at:  editor@farmshow.com

Goodness is the only investment that never fails. Henry David Thoreau

The smallest act of kindness is worth more than the greatest intention. Khalil Gibran

Do your duty, and leave the rest to heaven.Henry David Thoreau

We judge ourselves by what we feel capable of doing, while others judge us by what we have already done.  Henry Wadsworth Longfellow

Nothing is more responsible for the good old days than a bad memory.   Franklin P. Adams

Once a person is determined to help themselves, there is nothing that can stop them.  Nelson Mandela

Never ruin an apology with an excuse. Kimberly Johnson 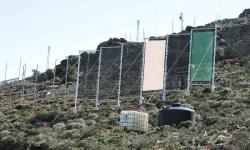 In a rural southwest region of Morocco, rainfall is unpredictable and underground aquifers have been largely depleted.  Average annual precipitation is only about 5 in.  However, the region does have one precious resource.  Because of its unique climate, heavy fog appears an average of 143 days a year, caused by warm air driven inland by ocean currents.  As the humid air rises, it hits the barrier of the Anti-Atlas mountains and turns into thick blankets of fog.  Over the past 10 years, a non-profit organization called Dar Si Hmad has set up the largest fog-harvesting project in the world.  Huge mesh nets capture water particles, which then condense and drip into collection trays.  Roughly 1,600 gal. of water are collected daily and pumped through 5 miles of pipes to reservoirs where its filtered for use by about 400 people living nearby.

Love to shoot pool? Like bowling, too? Steve Wienecke has the perfect game for you. Knokkers combines the two games into one big new passtime.

Instead of using a cue stick you throw the bowling ball-sized cue ball at 15 racked balls. Then you better be ready to get out of the way of the balls that will come rolling your way.