Father Of The Diesel Engine

the efficiency of steam and gasoline engines. He invented

the idea of using highly compressed, high temperature air to

ignite fuel and, in 1892, obtained a German development

patent. By 1897, his engine was a commercial success, bringing

him honors and wealth.

The first diesel engine for commercial service was built in

years, thousands of diesel engines were in use in many industries

throughout the U.S. and Europe. 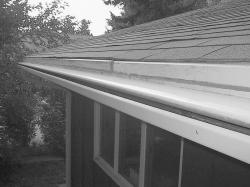 FARM SHOW bought Leafguard gutters for our office building three years ago (www.leafguard.com or 800 532-3482). The one-piece seamless gutters are formed on site. Our old gutters were worn out so we had them ripped off and replaced. Leafguard gutters have performed flawlessly, keeping the gutters clean of the leaves and seeds dropped by several huge silver maples trees that tower over our headquarters. Leaves wash over the top of the gutters and fall to the ground while water follows the curved top, flowing into the gutters. After many years of having to clean out gutters by hand twice a year, we couldn't be more pleased. The cost was about 30% more than conventional gutters. Mark Newhall, Editor & Publisher, FARM SHOW.

For the past 38 years we have published a special Best of FARM SHOW issue at the end of each year featuring the best made it myself ideas from the past year and many of the most popular commercial-built products previously featured in FARM SHOW.  I wanted to let you know that were not going to produce that free extra issue this year.  Weve decided to focus all of our efforts on producing new material for our regular issues.  One reason for this decision is that we often received complaints from readers about repeat stories in the Best Of issue.  Another reason is simply that the increasing cost of printing and postage for more than 200,000 copies of that year-end issue has made it difficult to justify.  For now, wed rather put our resources into the regular issues of FARM SHOW.

A lot of folks cant understand how we came to have an oil shortage here in America. Theres a very simple answer.

Nobody bothered to check the oil. We just didnt know we were getting low.

The reason for that is purely geographical. Our oil is located in places like Alaska, California, Oklahoma, Ohio, Pennsylvania and Texas.

But all our dipsticks are located in Washington, D.C.!!!