If I Were A Farmer 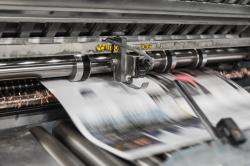 I didn't grow up on a farm.  I spent my working career before FARM SHOW with a newspaper and printing company.  In fact FARM SHOW was one of my first and biggest customers.

In printing, new technology came on fast and everything became computerized in the 90s and continued in the early 2000s.  Printing presses had remained the same for decades.  As computers brought new technology into the fold, new skills were required of operators and supervisors.

Printing has always been a mechanical craft, a good press manager knew mechanics, electrical and understood the chemical reactions between ink, water and paper.

I knew computers and had set up the pre-press end of several locations and customers to work with the new technology. When we installed a new press, it had many new computerized components that made things run better and more efficient  when it worked.  If things went down, it was more that just mechanical skills required to get running again.

Our press was in a rural area. We often couldnt get a service tech in to fix the press before our 3 daily papers had to go out each night.  I ended up working with our pressroom manager on some of the computerized parts of the press.  He knew his press and the mechanical end inside and out, but the new technology required computer knowledge.

Together we figured things out and each of us learned a lot from each other about how things worked and interacted.  How does this relate to farming?  The new technology that has come (and is coming) to farming is similar.  I can see farmers who know everything about their operation needing some help from the next generation on the new technology that is available. Tech is second nature to those who grew up playing video games and had cell phones while still in school.

Working together brought great improvements to the print plant.  We were careful not to be on the bleeding edge of technology but took on what was proven and could improve our operation.   I am sure it could do the same on a farm.