The Early Days of FARM SHOW 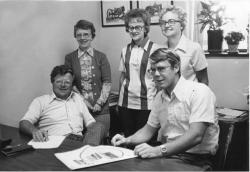 Harold Johnson, at left in photo, launched FARM SHOW in January, 1977. I got hired about a year later. Harold's wife, Joan (standing, left) and two neighbor ladies, Lois and Doris, literally started out with zero subscribers and grew it to 25,000 in just one year.  By the end of the second year, we had 50,000 and by the end of the third year, 100,000.  So it caught on very quickly.  This pic was taken in Harold's office in 1978, soon after I was hired.  Harold sold me the business in 1994 and died in 2006 from complications due to Parkinsons. Mark Newhall