(If your subscription is current, click here to Login or Register.)
2015 - Volume #39, Issue #1, Page #08
[ Sample Stories From This Issue | List of All Stories In This Issue  | Print this story  | Read this issue]
«Previous    Next»
Tractor Hobby Grew Into Successful Business
John Shepard and his wife operated a Wisconsin dairy farm in the early 1990s, but his real passion was restoring 2-cyl. Deere tractors. Shepard acquired so many extra parts in a few years that he opened a new business called Shepards Tractor Parts. More than 22 years later its still going strong. Shepard sold his dairy cattle in 1996 and never looked back.

My wife was in direct sales with home and garden items, so between the two of us we had good experience on the sales side, Shepard says. Early on we used to do a dozen or more shows a summer, which was a lot of work, but that really gave us good exposure in the market. Now we only do the larger shows and were more active on internet sales.

The business sells new, used and reproduction parts, primarily for pre-1960 2 cylinder tractors. They acquire used parts from individuals, order reproduction parts as needed and have their own inventory of 120 tractors for salvage parts.

Shepard says when he first started the business he was selling about half new and half used parts. Now they sell more new parts because theyre more available. With older tractors, theres always been a limited supply of some parts, Shepard says. There are only so many salvage tractors available, and once theyre gone, thats it. Parts manufacturers realized that and began making reproduction items, and now that business has really prospered.

Shepard has a large supply of popular sellers like seats, manifolds, grill screens, fenders, clutches and mufflers. They work with 3 or 4 suppliers of antique restoration parts and always try to use products that are made in the U.S. The quality is better, and thats what people want, Shepard says. I get flyers every day from companies offering reproduction parts and I screen them all. Many of them dont have the quality I want. The companies I do work with are legitimate suppliers of good parts, and thats what Im proud to sell my customers.

To promote his business Shepard runs small ads in Farm Collector, Green Magazine and 2-Cylinder magazine. He also has a website and sells parts on eBay. Were able to fill just about every order in a day or two, Shepard says. Hes always amused when people call and want a perfect original part from a 50-year-old tractor. I ask them if they know where I can get a like-new clutch for a 1960 Chevy or a like-new suit made in 1960, Shepard says. They get the drift that like-new salvage parts are hard to find, but reproduction items are just as reliable.

In 2009 Shepard expanded into New Generation Deere tractor parts in response to customer demand. Says Shepard, Todays younger restorers are working more on tractors they grew up with, so we have to meet their needs.

Even though Shepard has focused on Deere parts, he also carries reproduction parts for other tractors, too. We have items like magnetos, carburetors, brake line items, throttle levers, and other common parts for International Harvester, Farmall, Ford and other brands. If we dont have it we can guide a person to where they can find it.

Shepard still restores tractors in his spare time and has some for sale. 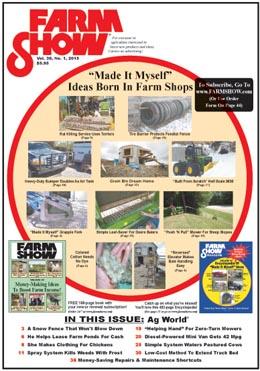