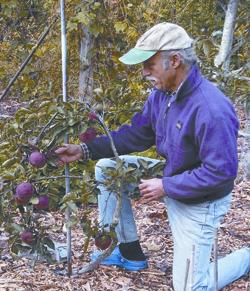 Research continues on making dwarf trees even smaller because they don't require as much space and the trees bear fruit as early as their second year. But smaller doesn't necessarily mean less work.

"You don't just plant them and walk away," says Dan Smith, one of the owners of TRECO, an Oregon company that produces 60 percent of U.S. apple rootstock sold to nurseries and orchardists, who graft and develop their own trees.

"The anchorage isn't as good as bigger trees, and wind or even heavy fruit affects them. They can easily get uprooted," he says.

Commercial orchards often use post and wire trellises, says Bruce Barrett, a researcher at Washington State University who evaluated rootstock for many years and is now breeding dwarf apple varieties. Growers who just have a couple of trees in the backyard can support them by tying the trees to a 2 or 3-in. stake pounded in the ground. Besides staking, dwarf apple trees need spraying, pruning and fertilizing just like larger varieties.

By definition, dwarf trees average 5 to 12 ft. tall, and researchers continue to work on new varieties for other fruits as well. Apple varieties are the most common, however, for commercial and home orchards.

Because the trees are smaller, it's easier to care for them and to harvest the fruit. And despite assumptions by some, dwarf trees can live as long as standard size trees, Barrett says. Apples from dwarf trees also are the same size and have the same characteristics as apples from larger trees. Barrett notes that because apples on dwarf trees tend to be shaded less, he believes the dwarf apple varieties can be sweeter because they get more sunlight.

Go to high-end nurseries in your area or search for dwarf trees on the internet, suggests Barrett.

One popular company is Stark Bro's in Louisiana, Mo.

Stark Bro's sends a tree care guide with each order with recommendations to not let the tree bear fruit until the third year to establish stronger roots.

While dwarf and semi dwarf apple varieties are most common, Stark Bro's offers a variety of other dwarf fruits such as apricots, cherries, pears and plums. They also have mini versions of peaches and nectarines that fruit the second year, grow 4 to 6 ft., and are suitable for patio pots.