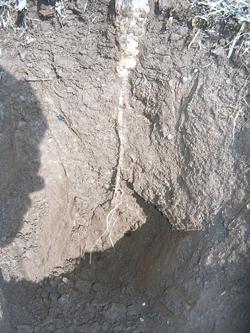 "Anyone who farms no-till can benefit by planting tillage radishes during the fall as a cover crop. The roots break up soil compaction and leave the soil in a much nicer planting condition the following spring," says Steve Groff, Holtwood, Penn.

The reason tillage radishes are so good at breaking up soil compaction is their long tap root, which can reach down up to 36 in. They can often eliminate the need for deep rippers and chisel plows. "It's a biological solution that reduces compaction, saves fuel, and helps the soil," he says.

Tillage radishes also offer other benefits, says Groff. "They provide outstanding weed control. They take up left-over nitrogen in the fall and then the following spring the decomposed plants release it back into the soil, reducing nitrogen costs. And they increase water infiltration."

On his own farm, Groff has planted field corn, sweet corn, soybeans and wheat into tillage radishes. But corn seems to respond the best. He says research indicates a 10-bu. per acre corn yield increase where tillage radishes were planted the fall before. "The yield increase may vary, but I've never seen a yield decrease," says Gruff.

The University of Maryland has conducted cover crop test plots on his farm. "We've identified the best radishes, with the strongest tap roots to break up subsoil compaction."

The biggest limitation to tillage radishes is they have a short planting window. "They should be planted any time during August or September so the roots will have time to grow deep into the soil before the plants are killed by frost. For corn and soybeans it's tough to get radishes planted in time for them to grow."

Radishes can be mixed with rye or oats. The rye will lie dormant over the winter and come back to life the following spring.

Radish seeds look like alfalfa seeds. "You want to get them 1/4 or 1/2 in. deep in the ground like you would with alfalfa. Or you can broadcast the seeds on top of the crop," says Groff. "Any no-till drill can be used to plant them."