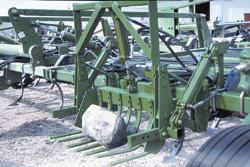 "When getting fields ready for planting, there always seems to be some rocks that are just a bit bigger than what we can pick up by hand. And they're usually at the far end of the field," says Jill Duckett, Aurora, Iowa.

"We used to mark them with tile flags and return later with a loader to dig them out, which took a lot of time.

"Last spring, after finding one too many big rocks, my husband asked our inventor neighbor, Dick Rau, if he could come up with a hydraulic rock lifter that would attach to the field cultivator. Always up for a challenge, and a magician with steel, Dick went right to work. After several versions, he came up with a bolt-on rock lifter that's powered by three hydraulic cylinders. It attaches easily to the front of our Deere cultivator.

"The rock lifter has two cylinders to raise or lower the basket and one to dump the rock. The up and down cylinder lowers the scoop below ground level to dig out rocks that are partially buried.

"The rock lifter mounts on the left side of the cultivator but could be placed anywhere. With this new tool, we're actually looking forward to finding rocks in the field. Best of all, Dick painted it Deere green to match the cultivator!"