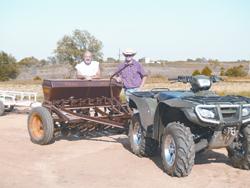 Old grain drills can be cut down and converted into low-cost seeders for small food plots and native grass seeding, says Kenneth Hill, Erick, Okla., who had a friend, Andy Fenley, cut an old Minneapolis Moline 14-ft. end wheel drill in half to build a 6-ft. 8-in. wide drill. He pulls it with an ATV or small tractor.

They started with a 1960's-era Minneapolis Moline 14-ft. drill that Hill already owned. It was equipped with a single box and with double disc openers and drop tubes. He removed one of the end wheels from the box and then cut the drill in half, then reattached the wheel. He also shortened the hitch by 6 ft. and moved it over so the "half size" drill would pull directly behind the ATV.

"It works great for planting seed plots for deer, quail, and other livestock," says Hill. "We used it last spring for the first time to plant 3 1/2 acres. We mix rye, wheat, and turnip seed together which makes a great food plot mixture. We also used it to plant a couple of big gardens and to plant a cover crop in an orchard to keep the wind from blowing the soil away.

"It took only about seven hours to build. Our biggest expense was the fancy car paint that we used to repaint the drill."