Manure Burner Pays For Itself And Then Some 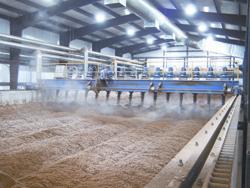 Manure is becoming hot property with the price of fertilizer going through the roof. Paul Schneider, president of EcoCombustion Energy Systems, has found a new way to profit from manure - he burns it.

Schneider designed and installed a system he calls Elimanure on a 1,700-cow dairy in Wisconsin. Elimanure does more than burn manure. It gasifies the manure and uses the gas to heat water to produce steam to power a 600 kW electrical generator, as well as satisfy the farm's hot water needs. Once the system has started, burner heat is also used to dry the manure -- a combination of liquid, dry pack and parlor water -- down to a 40 percent moisture level.

Schneider says the aerobic system virtually eliminates odor. Burning manure traditionally produces a lot of particulates in the air as well. Schneider has designed a cyclone system with a dust collector that reduces the problem.

Some of the dried manure is used for bedding but the majority is burned. The combustion process reduces volume by 98 percent, saving large dairies the cost of removal and spreading. Weise Brothers Farm, where Schenider's system has been installed, produces 25 million gallons of manure a year.

Elimanure not only eliminates the bulk of removal costs, it also generates income by selling excess electricity to the local utility. Schneider projects payback of the system of pumps, auger/mixer, fans and combustion unit in less than four years. A positive cash flow is expected within the first year.