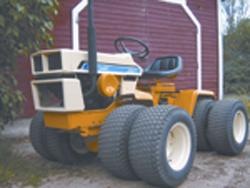 When people tell Darryl Schmidt they didn't know Cub Cadet made a dual wheel, articulated model, he feels satisfied that the 3 1/2 years he spent working on his custom tractor was worth the effort.

"The single most challenging part was connecting the front and real axles together so that the speeds were in perfect synchronization," says the Alexandria, Minn., man. He used rear axles from two of the (1970's) Cub Cadets he had picked up over the years. He used the articulation principles from the International Harvester Steiger-built model 4366.

"I found a gearbox by Hub City Manufacturing to transfer the power to the rear axle. The ported hydro on the rear half provides the hydraulics for steering, and I reversed the swash plate in the front hydro to allow the ground speed ratios to match. I powered it with the stock Kohler engine from an old 1650 Cub Cadet," Schmidt explains.

It was also challenging to keep the proportions correct. Schmidt, who grew up on a farm and has worked in farm equipment and industrial supply sales, notes that he built his custom tractor with limited tools. He worked out of a revamped chicken coop and used a sawsall, cutting torch and a wire-feed welder.

He started with plenty of old Cub Cadets for parts. He ended up with a scrap pile of failed ideas that taught him many lessons. "I could tell you a lot of things that don't work," Schmidt says. "This project was rewarding because it was such a challenge."