He Converted His Pickup To Natural Gas 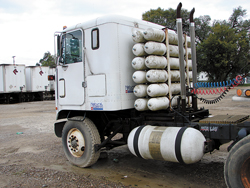 A hybrid system of diesel and compressed natural gas (CNG) is the answer to high diesel prices, says Kent Sundling, better known as "Mr. Truck" through his website and newspaper columns. He thinks we should forget about vegetable oil, biodiesel and hydrogen and concentrate on making CNG work. "The beauty of a hybrid CNG/diesel system is that if I can't find CNG, I just run on diesel," he says. "At a 2:1 CNG to diesel mix, it's like increasing miles per gallon by 25 percent."

After getting a CNG unit installed in his 2005 Ford F-250 diesel, Mr. Truck drove from Ohio back to his home in Colorado. "I found out right away that in some states CNG can be hard to find and in other states it's complicated to buy. Many fueling stations use a special card that you have to apply for."

In his home state of Colorado, he had to fill out and fax in a four-page application plus copies of credit card and drivers license to the company that controls CNG filling stations. He notes that there are nearly 780 such stations in the country. To find current prices and locations, he suggests checking the industry website.

Mr. Truck says that while you can convert gasoline engines as well as diesel, heavy-duty diesel engines are ideal. Unlike gas engines with spark combustion, diesel combustion eliminates problems with predetonation or the need for knock sensors.

Mr. Truck notes that farmers he has met in Ohio have built a portable unit that they can move between their pickup and their combine at corn harvest. Due to natural gas wells on their farms, they get free CNG. It saves them several hundred dollars a day on fuel costs.

After getting his system tuned, Mr. Truck reported a 23 percent reduction in cost per mile when pulling a trailer and a 27 percent reduction when driving an empty truck. This was based on then current Colorado fuel prices.