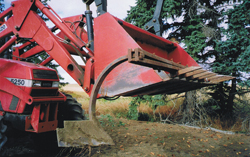 Getting potatoes out of the ground doesn't have to be slow, back-breaking work, nor does it require a large investment in equipment. The Hal Martfeld family of Unity, Sask. made a home-built digger attachment for their tractor.

"Although we don't grow potatoes commercially, we do grow enough for family and friends, and that makes digging them by hand a real chore," Hal explains. "The tool we made fastens to our front-end loader and makes the job go much easier."

The device consists of two heavy, 6-ft. long steel bars bolted together. A cultivator shank attaches to one end. An ordinary cultivator sweep is bolted to the shank, but the wings of the standard 14-in. shovel have been twisted to give them a more aggressive angle. Martfeld also welded flat steel plates to the sweep, widening it a little on each side.

He bolts the attachment to digger teeth on his loader bucket.

"The digger's working depth and angle are adjustable from the tractor seat, using the front-end loader controls," he explains. "It must stick out from the loader far enough to give the operator a good view, and to prevent potatoes from rolling under the tires as you drive down the row."

Martfeld says it's quite important that the potatoes be well-hilled for the tool to work properly. It's not necessary to pull the plants before going down the row, he says.

"We work toward the center of the patch by going down one side and up the other, then picking the potatoes before repeating the procedure," Martfeld says.