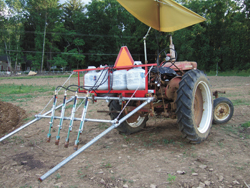 By Dee Goerge, Contributing Editor
After reading about "flamers" used by organic growers to kill weeds, Tibor Sipos of Califon, N.J., decided to build his own fire-powered weed killer. Sipos and his 13-year-old son, Paul, grow about 10 acres of vegetables to sell.

"When dealing with small plants like lettuce, which are close together in beds, it's tough to cultivate," Sipos says. Burning beds before plants emerge kills weeds and weed seeds. Once the plants start to grow, they choke out small weeds that come later.

After much research, Sipos gathered angle iron, galvanized water pipes and other materials he had on hand. He purchased scaffold fittings to connect the parts and built a frame to attach to his tractor's 3-pt. hitch. The angle iron frame holds four 20-lb. liquid propane tanks, which are hooked up to four commercially available weed burners. A cross piece on the frame holds the burners about 8 in. off the ground, about 4 ft. behind the LP tanks. Two long water pipes drag behind to maintain an even distance to the ground.

By using one tank per flamer, Sipos says he doesn't overload the liquid propane to the point it freezes up and doesn't work. He was impressed with the results of beds he flamed.

"Where it wasn't flamed, beds had 8-ft. weeds," he says. "But weeds were small where I flamed."

He noted that the weeds don't have to be burned completely.

"If you can see your fingerprint on a leaf, it's burned enough," he explains. "You just need to heat weeds to destroy the cell structure. They just dry right up. I had one area of lambs quarter that was about 4-inches tall. I flamed it and the next day, they were all gone."

He is satisfied with how his homemade flamer worked, but has ideas for improvements: hoods over the flamers for wind protection, tires or metal shoes on the pipes that drag, moving the tanks closer to the tractor driver and adding solenoid switches to turn them off quicker, and maybe adding two more tanks and flamers.