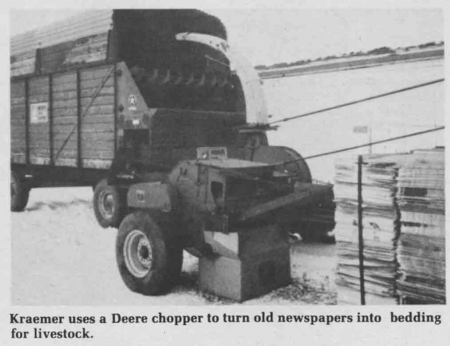 This past winter, Wisconsin dairy and hog farmers got a chance to watch old newspapers being shredded into bedding at a demonstration near Chippewa Falls.

A Deere Model 35 forage chopper turned 3,000 lbs. of newspaper into bedding in about an hour. The only modification of the chopper was replacement of the pick-up tines with a steel chute of newspaper size. The knives and screens were set for a 1-in. cut.

Shredded newspaper bedding provides two-fold benefits. It replaces straw and shavings which are in short supply, and it makes use of a solid waste that's now being buried in landfills.

Calvin Kraemer, Chippewa County agricultural agent who is helping to promote newspaper bedding for live-stock, says that it's drier and more absorbent than straw. It breaks down rapidly when spread in the fields, and the material is easy to handle with most manure handling systems.

"It takes a ton of newspaper bedding per cow per year," says Kraemer. "A farmer can chop it as needed, or bale and store it."

If newspaper bedding suddenly became popular, there wouldn't be a big enough supply in rural areas. An average family buys 7 lbs. of newspaper a week, so it would take six families to provide the ton of newspaper needed for one cow for a year.

In another part of Wisconsin, 500,000 tons of newsprint were separated out of residential solid waste and sold to farmers for bedding last year, with the potential for doubling this amount this year. An estimated 14% of all landfill material is newspaper.

Farmers attending the Chippewa Falls demonstration who have tried newspaper bedding are sold on it. One said it goes farther and lasts longer than straw. Another said it handles easily and disappears when spread in the field.

Here are other comments from other hog and dairy farmers who use shredded newspaper to bed their animals:

"It works great for pigs. Not only keeps them dry but gives them something to tear into. I even bed day old pigs with it."

"Pigs don't eat it but young calves will chew on some of it, the same as with straw."

"For cows in stanchions or stalls, newspaper bedding has to be chopped into pieces or the cows will work it back too fast."

"I don't think there's any more of a fire danger with newspaper than with straw. Bales of custom-shredded paper are packed so tight that they're just like bricks."

"Disposing of manure laced with newspaper bedding poses no problems. We spread it on cornfields where it seems to break down easier than conventional straw bedding. It's easily handled with most any waste-handling system."

"Paper bedding lasts a couple of weeks, whereas we had to bed cows twice a week with straw."

"One disadvantage is that paper blowing around the farm can cause an unsightly litter problem. It may not look as nice as straw but, used in the barn, it's a lot more attractive than it would be going to waste in some landfill."

There has been some concern about lead in the printer's ink, but this is a minor amount and animals don't eat the bedding, notes Kraemer. He cautions farmers to use only newspaper without staples to avoid any hardware problems.