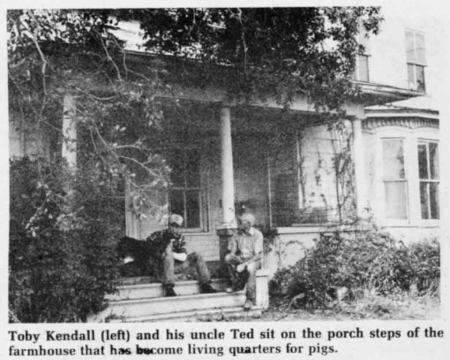 When Illinois hog farmer Joe Kendall of Galva, says his house looks like a pigpen, he's not joking. He has converted an old farm house into a pig nursery designed to hold 225 baby pigs.

"You might say I've rented my farmhouse to the pigs," Kendall jokes.

Located across the road from the Kendall residence, the seven-room house had stood vacant for two years. Although it still had a solid foundation and sound walls and roof, it required extensive remodeling to make it livable.

"At first, I thought I would tear it down to eliminate the hassle of trying to rent it," Kendall says. At the same time, he needed a pig nursery but didn't want to invest a large sum of money in a building project. "Then I thought, 'Why don't we use this for a pig nursery?'

"I figured that 240 pigs would eliminate waste to the amount of 12 toilet flushes per day. I thought we would run the water into the septic tank or use the tank as a holding basin." Without the expense of a pit and with heat from the furnace in the basement, Kendall thought he could set up a nursery for a very low price.

Then in July, he consulted an agricultural engineer about ventilation in the house. "He doubted the septic tank would work, and also felt that the furnace would be too inefficient," Kendall recalls.

After considering this advice, Kendall constructed a cement pit behind the house and installed an LP gas heater in the house.

Kendall's brother, Ted, a food technologist currently living in the Galva area, did a major portion of the construction work in the nursery. He was assisted by Kendall's sons, Chris and Toby.

Ted Kendall covered the walls with insulate sheeting obtained as seconds. "It has an insulation value and keeps moisture away from the plaster," he explains.

In the former dining and living room area, he built 16 confinement pens designed to hold 14 pigs each. They are arranged in double-deck rows of four each.

He also built the fiberglass trays under the pens. Manure is flushed along the trays to one end of the room where it is funneled into the pit.

The gas heater is located in the entryway to the house. A fan in a nursery window sucks warm air from the entry into the nursery.

Feed is stored in upstairs bedrooms. Holes in the floor allow the Kendalls to pour bagged feed directly into the feeders below.

"Carrying the feed up here is very good for fellas that play football," says Ted Kendall with a grin for his When Illinois hog farmer Joe Kendall of Galva, says his house looks like a pigpen, he's not joking. He has converted an old fay house into a pig nursery designed to hold 225 baby pigs.

Joe Kendall says he may eventually buy feed in bulk and auger it to the second floor where a large room would serve as the holding bin.

Downstairs in the kitchen, the cupboards and sink are still in place. Kendall will store his medication and tools in this room.

Recently Kendall moved in 125 four-week-old pigs and plans to leave them in the nursery for a month. He hopes to keep the nursery in use year-round.