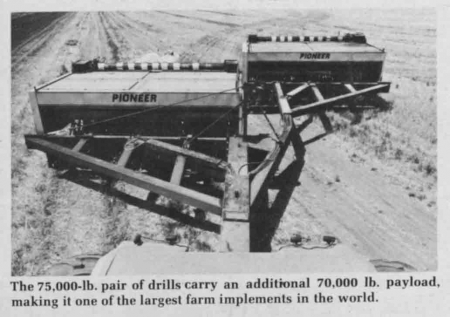 That giant no-till drill first featured in FARM SHOW 18 months ago has been teamed up with a second drill to make what inventor-manufacturer Guy Swanson of Spokane, Wash., calls "one of the largest farm implements in the world".

The huge Pioneer drill can apply as much as 2,000 lbs. pressure per seed opener while banding phosphates and nitrogen around the seed and applying herbicides to control weeds.

"Our drill works as well in stubble ground as a conventional drill in fine-tilled soil," says Guy Swanson, noting that the drill has a unique double-disc opener with a slicing coulter. A "scuffer" disc kicks straw and other debris out of the seed trench ahead of it.

A major feature of the machine is that it allows the use of liquid, gas or dry fertilizer. Phosphate can be planted with the seed, while nitrogen is banded to the side and below. "There's no interference from surface residue as there is with top-dressed fertilizers," points out Swanson. Liberal quantities of herbicides -- particularly Roundup, Paraquat, Hoelon, Sencor and Fargo -- as well as insecticides can also be applied with optional equipment.

"Fuel use per acre is reduced. Each extra inch of moisture trapped in the ground -- translates into 7 bu. of grain. This coupled with the precise placement of our fertilizers, gives us a healthy increase in income per acre with this drill," says Swanson.

"Other benefits, especially when you get into hilly grain areas, include ten times less soil erosion with the drill and the ability to seed slopes as steep as 55 degrees," Swanson points out.