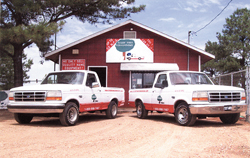 More than a few FARM SHOW readers have installed a car or truck motor in a tractor. Gary Brown of Byron, Georgia, and a group of friends are going the other way, putting tractor diesels in cars and small trucks.

"The first one we did took us four months to do," says Brown. "The last one runs smoother, gets better mileage and took about seven days to do."

He says the difference was a combination of experience and finding new shortcuts. Perhaps equally important was knowing what they needed for parts and where to get them. In the book the group has published, they provide a complete list of sources.

"We found an outfit in Florida that sells transmissions and will custom build gears for half the price of our original source," says Brown. "We also found sources for motors and bell housings."

Because all six of the group's members are part time farmers and small business owners, the work has been done evenings and weekends. Since they first decided to chip in on some vehicles, Brown says they have spent a lot of money on the project. However, they also have three vehicles to use or sell.

"Our first project was to convert a Ford F-150 to diesel using an engine from a Ford 4600 series tractor," recalls Brown. "The engine is rugged and heavy duty. Because it was rated at only 55 hp, we added a small Vortec super charger that was originally designed for a four-cylinder Honda."

They rebuilt the engine, had the injectors and pump rebuilt by experts, and built new mounts to handle the engine, which was heavier than the original 302 V-8. They also had to box the brace that runs underneath to get the engine down low enough.

"We selected a Tremec T-5, five-speed overdrive transmission and found a bell housing from a straw blower machine," says Brown. "We replaced the clutch with an 11-in. automotive type for a 3/4-ton Ford truck. After buying a clutch, pressure plate and throw-out bearing, we discovered the throw-out was too long and had it machined to the proper length."

They resurfaced the flywheel and drilled new holes for the automotive pressure plate to fit the heavy-duty tractor flywheel. When they tried to mount the transmission, they discovered a 1/4-in. gap, took the measurements to a machine shop and had a ring machined to fit the space.

"When you encounter something that doesn't fit, you just have to stop and figure out what to do," says Brown. "With six people on our crew, we could usually figure something out or get the advice we needed."

For example, when they mounted the transmission, they realized the mount bracket was off a few inches and made an adapter out of a piece of 1/2-in. steel. Once it was bolted between the transmission and the mount, they discovered the shifter didn't line up with the hole in the floorboard.

"We talked to a friend who was a transmission expert, and he just laughed and told us to cut a new hole and seal up the old one," relates Brown. "We told him that then the shifter would be too close to the seat to shift into second and fourth. He laughed again and said, 'Just mount the shifter backward'."

With the transmission and engine mounted, the driveshaft had to be shortened about 6 in. They used the power steering pump that came with the engine, but adapted the pickup's alternator to the new engine. "We replaced shocks and wheel bearings and serviced the rear end, replacing the lube with synthetic for less friction and improved economy," says Brown. He stresses that when seeking fuel economy, little things like the right lube and tires make a big difference.

Other changes needed included adding a vacuum pump for the booster on the power brakes, as well as the heat and air controller. The throttle cable had to be moved as well. Other basic modifications included replacing cables and connecting hoses where needed and adding a larger battery to turn over the diesel.

"We used a 12-volt radiator fan wired to a thermostat," says Brown. "It only runs when the engine needs it, but it will operate even after the engine shuts down."

They also removed the larger of the two fuel tanks and installed a 12-volt fuel pump. The exhaust system had to be reworked to accommodate the supercharger. A friend cut out a flange, and one of the group hand-built exhaust tubes and welded them to the flange.

"You need to be sure that all the tubes are about the same length," says Brown. "If one is radically longer, it can throw the engine out of balance." The clutch linkage also had to be replaced, as the pickup had one type of linkage and the bell housing had another. The group rebuilt and adapted what they needed, though Brown acknowledges there's an easier way.

"A dual cylinder hydraulic clutch system could be used in place of the linkage, but we like to suffer and do things the hard way."

Once the work was finished, the group took the truck for a test drive. "The three-cylinder had plenty of torque, but the overdrive gear was too high," recalls Brown. "We ordered a gear kit and dropped the gear ratio."

With the original engine and transmission, the pickup got just 13 miles per gallon, says Brown. The converted truck gets triple the mileage at about 40 mpg. Since that first attempt, Shade Tree conversions have done several more pickup conversions and a 1980 Ford Mustang. They've worked with three and four-cylinder motors with super chargers, turbochargers and natural aspiration.

"We believe the best formula is a four-cylinder with a turbo and a five-speed overdrive," says Brown. "We have a small Ford car that gets up to 50 mpg and pickups that get 40 to 50 mpg and can reach speeds of 100 mph."

Plans are available from Brown in either printed or digital form. Included are names and addresses of sources of engines, transmissions and other components. Also included are multiple high quality photos that cover key steps in the process.