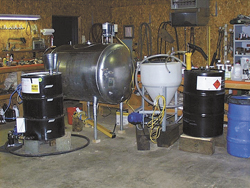 "I run the vacuum hose carrying the vapors through a pail of water, which condenses them back to a liquid that I can collect and reuse with the next batch of biodiesel," he explains.

Hubbard recognized that if he could pull the methanol out of the glycerin that's washed from the biodiesel, he could recycle it and cut his costs. To do so, he runs the glycerin through a modified still where it's heated under vacuum to 170 degrees F to release the methanol as vapors.

Hubbard uses a tank large enough to handle a 5-gal. pail. The tank is an old compressed air tank with the weld joint cut away. The top has a rim that slips into the bottom half of the tank for a tight fit. A pail of glycerin is set in the bottom half of the tank along with a heating element. Hubbard slips the top in, runs a strip of tape around the joint to make it airtight, and attaches the vacuum line to the air valve.

"It usually takes about three hours, but the time will vary depending on how much methanol was used in processing," he says. "When no more methanol is condensing, I know it's done."

Not only does the process allow him to reclaim methanol and lower his processing costs, his cattle love the pure glycerin. "They eat it like candy," says Hubbard.

He also found a way to simplify one of the steps in making the biodiesel itself. Knowing when all the glycerin and impurities have settled out of washed biodiesel is vital. He notes that the oil can look clear near the top of the tank, even though all the soaps haven't settled out farther down. "I adapted a flashlight so I can get light all the way down through the oil," says Hubbard. "I removed the light bulb and soldered two 3-ft. wires between the socket and the bulb."

The bulb extension allows Hubbard to lower the light all the way to the bottom of a barrel of oil to check for impurities. "If it still glows down 3 to 4 ft., I know it's clear."

For many biodiesel producers, obtaining used vegetable/cooking oil is getting more difficult. To find an adequate and secure supply, Hubbard and his friends approached a nearby college. Because the oil would benefit local farmers, the college agreed to give them all their oil instead of selling it to commercial operators.