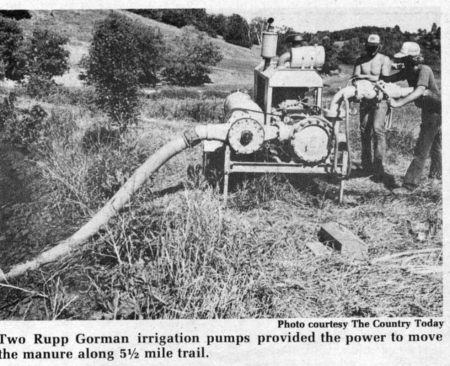 Charles Dow's liquid manure pit holds 4 million gallons, and this past summer it was full. The problem was where to spread the manure and how to get it there as cheaply as possible.

Dow's home farm is in a narrow valley with very little space for spreading. Most of his crop fields that need fertilization are several miles away across some of western Wisconsin's typical rolling hills.

"It would take 3 to 4 months hauling around the clock with a tractor and trailer-mounted tank, and could do considerable damage to the roads. We also thought of buying a semi-truck and tanker which would have taken 5 months, working 10 hours a day," says Dow.

He decided to call in a commercial company, which specializes in moving liquid waste. They set up a transfer pipe system that stretched out nearly six miles to a temporary pit on another part of the farm. The 6-in. aluminum irrigation pipe followed a road, crossed two creeks and climbed a hill before it reached its destination.

The pipeline included about a half mile of 6-in. rubber hose, which was used to get around corners, across the creek and other difficult places. The route was approved by the Wisconsin Dept. of Natural Resources, which determined that it would not pollute the land and water along the route. Before pumping started, the line was tested for leaks by running water through it.

Two Rupp-Gorman irrigation pumps (225 and 285 hp) provided the power. The pump at the start of the line was equipped with a chopper to break up any solids that might clog the line. The second pump was a booster about two miles away.

When pumping started, five-man crews patrolled the line to be sure there were no plugs or leaks. Pumping continued around the clock until the job was finished 125 hours later.

Dow will pump out the transfer pit conventionally, or irrigate the liquid manure on a nearby field. He'll probably have the pumping company come back in two years to empty the big pit again.

Pumping all kinds of liquid wastes is the job of this company, and it's a growing field. The company, head-quartered in Menomonie, Wis., works mostly in western Wisconsin but will go 150 to 200 miles. The Dow job was one of the bigger ones they have done. In fact, Al Sprader who supervised it, thinks this is the longest distance that manure has been pumped anywhere in the world.

The company moves liquid waste by pipeline, irrigation rig, and field tank. They have now become involved in pumping through a 660-ft. hose connected to a chisel plow for "on the go" direct injecting of manure into the soil. (This system was featured in the July-August, 1982 issue of Farm Show).