Would You Believe A Two-Wheeled Car? 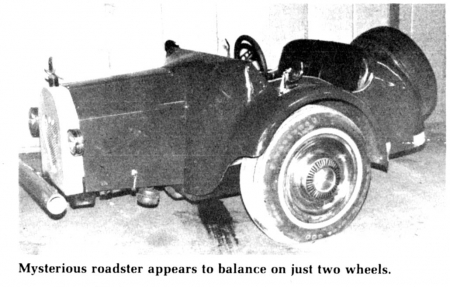 Remember that two-wheeled car which was featured in FARM SHOW two years ago -- the one that appears to defy gravity?

Since our report, what started out as one man's hobby has now mushroomed into a booming business called Two-Wheel Fun. The company is selling plans, instructions, car kits, and other components for the two-wheeled vehicle.

The mysterious looking car appears to defy gravity as it chugs along, balanced on its two wheels.

The secret is inside the soft radial tires. The tires are just shells that hide the two support wheels placed 13 in apart inside the tire and chain-driven by a small motor under the hood.

Most of the weight is balanced over the wheels. The car is operated at 4 to 5 mph, and must be driven on a hard, level surface. It's mainly a parade vehicle.

Says car designer, Pete Schlatter: "We guarantee that the car will run if made according to our plans."