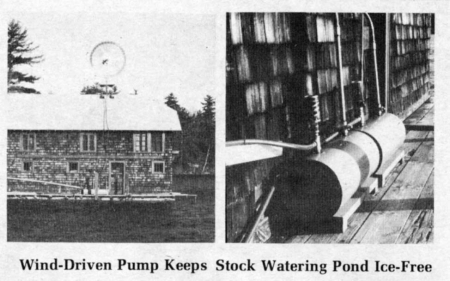 A system being used in New York State to keep ice from damaging boat docks can easily be adapted to keep stockwatering ponds ice-free.

The principle of the system is to circulate warmer water from the lake bottom to the surface to melt the ice that has formed. Air is bubbled through the water with a pump that is powered by the wind. Therefore, the system can operate in remote areas independent of fuel or electricity.

The system can be built and installed by the average handyman, says Bernard Cain, a consulting engineer who has experimented with it.

"You need four major components to put it together," says Cain. "A windmill, air cylinder, check valve, and relief valve."

The check valve is to prevent water from backing up into the air tubes when the pump isn't running. The relief valve is necessary to relieve pressure in case the line does freeze up.

Cain emphasizes that the check valve must be "absolutely reliable" because water back-up in the tubes will stop everything until it thaws out again.

The wind-powered bubbler will work in any pond or body of water that doesn't freeze to the bottom, which means a minimum depth of about 6 ft.

The windmill, placed where it will catch the most wind, is hooked to an air cylinder rather than the usual piston water pump. The air cylinder is connected to a hose which is submerged at least 4 ft. below the water surface. The hose may be rubber or plastic and has holes punched to create bubbles in the area where the ice is to be kept clear.

Size of the windmill and air cylinder will depend on how far the air needs to go, and how many holes are in the bubbler.

Any standard windmill can be used. Cain modified the pump so it pumps on both the up and down strokes. The air hoses can be 3/4-in. garden hose or flexible plastic pipe.

For the all-important check valve, Cain suggests contacting the Bivco Valve Corp., 100 Production Ct., New Britain, Conn. 06051. He emphasizes that an ordinary water system check valve is not good enough for this job.

Cain designed his own relief valve and had it made locally, but he thinks a Bivco valve might do the job. The underwater part of the bubbler should probably be made of copper tubing.

To keep the dock clear on the lake, Cain turns on his system in November and leaves it on until April, unattended except for an occasional inspection. Since everything is mechanical rather than electrical, there is little chance of failure.