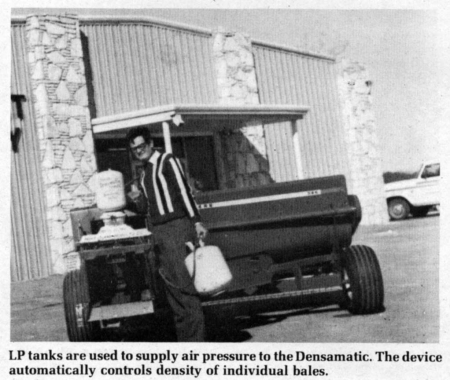 ''I decided there had to be a better way," says Owen Holman inventor of the Densamatic, an automatic bale density controller manufactured by Hav-Pak, the Company he heads at Corpus Christi, Texas.

"I've field tested it myself for more than 5 years and have had other prototypes operating in various parts of the country for the same length of time. All work very well and have been of great help to the people using them," he told FARM SHOW. "Custom hay balers really like it."

The device virtually eliminates variation in bale density, and the usual broken twine or wire problems resulting from bales being too loose or too tight, explains Holman. He claims the Densamatic will "run circles around hydraulic systems for controlling bale density and costs about half as much." His invention uses air pressure to determine density. Simply turning a valve to change air pressure changes bale density. Air pressure (60 to 70 lbs.) is supplied by portable LP gas tanks.

The unit is self-contained and can easily be adapted to most conventional rectangular balers.