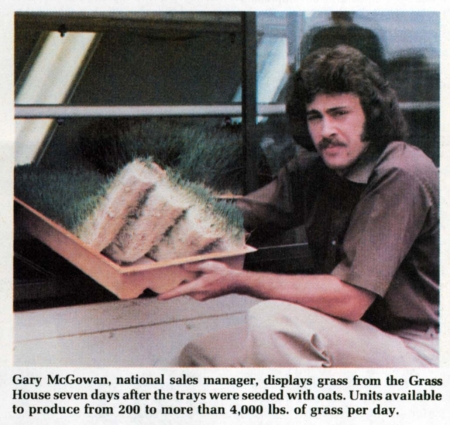 That "on-again, off-again" hydroponic system of growing "spring fresh" green grass year round without soil is on again.

The latest system is the Grass House, available in models that produce from 200 to more than 4,000 lbs. of grass per day.

Until now, hydroponics -- despite repeated attempts -- hasn't caught on with beef, dairy or hog farmers. College and University researchers generally have remained skeptical and unimpressed.

So now comes the Grass House from New Era Enterprises, Marion, Iowa, and with it the obvious questions:

Is it simply another attempt to ride a dead horse? Or, does it indeed represent a breakthrough design which overcomes problems which caused previous systems to lose favor with dairy, beef or hog farmers?

For openers, the company is offering a "buy back" contract: "If the system doesn't perform up to the owner's expectations, we'll buy it back," says McGowan. He points out that high labor requirements hurt previous systems. "We've reduced it to only a few minutes per day."

Another major improvement, according to McGowan, is replacement of galvanized trays, in which the seed was previously soaked, with corrosion-profiber glass trays, and a new method of foliar spraying nutrients onto the growing grass rather than soaking the roots. "We've also developed newer and better nutrient solutions, and improved the environment within the unit," explains McGowan.

"We work right with the new owner the first few weeks. Once he's experienced in managing it, he or his family can handle the labor chores in only about 15 min. per day," McGowan points out. Each tray, seeded with about 7 lbs. of oats or barley kernels, provides 45 to 55 lbs. of green grass in seven days.

Company literature describing the new Grass House presents many of the same general arguments and claims which have accompanied previously-introduced hydroponic systems over the past 15 or 20 years.

" ... In our lifetime, we will see hydroponics come into this era with astronomical leaps and bounds-the population explosion and land shortage will invariably bring this about."

... "They don't make land anymore, but we can give you the equivalent feeding production of approximately 100 acres on your farm from one 24 by 32-ft. Grass House."

... "The 'X Factor' in succulent grass juices cannot be identified by science; however, the results are overwhelming and now it can be a part of your farm program."

... "As if high quality feed (producing greater profits) wasn't enough, the Grass House can save you as much as 50% in your feeding costs."