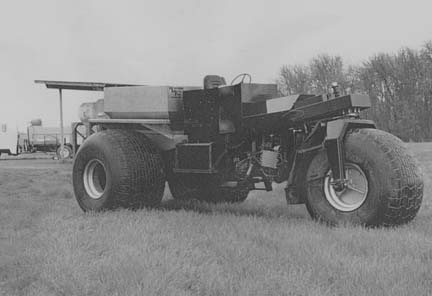 Dale Brock and his son Troy, of Harrisburg, Ore., grow about 1,500 acres of grass seed on low, soft ground. They needed a high flotation machine that would apply fertilizer and herbicides without compacting the soil, but they couldn't justify the cost of a commercial sprayer. They solved the problem by building their own 3-wheeled "swamp buggy" for about half the cost of a new rig.

It rides on 66-in. high, 44-in. wide flotation wheels and can be used either as a fertilizer spinner spreader (equipped with a 4,200-lb. capacity steel hopper) or as a sprayer (equipped with a 500-gal. plastic tank and 60-ft. boom). A hydraulic pump driven off the engine crankshaft raises and lowers the boom and also operates the sprayer pump.

Dale says the 2-WD rig doesn't have all the bells and whistles found on similar commercial rigs. "But it works great and we saved a lot of money."

They used a single length of 2 by 8-in. steel tubing to build the frame, which tilts upward toward the front at an 8 degree angle. Power is supplied by a 351 cu. in. V-8 gas engine out of a Ford pickup. The engine is coupled to a C-6 automatic transmission from the same pickup. The driver sits on an air ride seat and is protected by a steel "half cab" that extends up to the steering wheel.

The front wheel pivots on an axle hub off a semi truck that's bolted to the bottom of the front end of the frame. The hub is turned by a hydraulic cylinder to steer the rig. On back is an Italian-made Hurth axle and rear end with internal wet disc brakes, an 18 to 1 gear ratio, and planetary gears mounted on the outside hubs.

The machine is equipped with a Raven 660 monitor that's GPS ready.

"We started building it in February 1997 and used it that spring on 300 acres," says Dale. "Since then we've used it to apply fertilizer twice every spring and to spray once or twice. We've also done some custom fertilizer spreading with it. We kept the weight down by installing a lighter weight axle and by using a plastic tank instead of a steel one. Six bolts hold the sprayer frame to the swamp buggy and two bolts secure each tank. It takes only about an hour to switch from spraying to spreading.

"The rear end's low 18 to 1 gear ratio compensates for the rig's big tires so we can drive slow. We spray at 12 mph and spread fertilizer at 15 and 20 mph. The fertilizer spinner has a 60-ft. spreading width. However, we usually overlap and spread 30 ft. wide at a time."