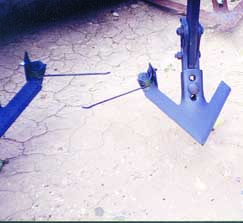 This new-style row crop cultivator sweep pulls weeds out from within the row as it cultivates between rows. It also increases the soil's water-holding capacity by breaking up the crust along the row.

That's according to Ace Eustace, inventor of the sweep which he calls the "Ace Weed Devil". The Lubbock, Texas, farmer has been perfecting the concept for the last four years and it's just going into production at Wild Cat Mfg.

The Ace Weed Devil consists of a conventional 10-in. sweep fitted with a four-coil spring tine that's positioned to run 3/4 to 1 in. deep within the row to remove weeds and aerate soil -- without harming crop stalks or roots.

"I've used them on cotton, soybeans, corn and sunflowers and they definitely do a number on weeds," Eustace says. "But they don't skin stalks or damage roots."

The 6-in. spring tine bolts to the back of the sweep. It pivots on the bolt so it can be set to be more or less aggressive depending on the crop. A nut on the back of a small upright bracket behind the spring makes it easy to adjust.

"As the crop gets bigger, you increase tension to make the springs more aggressive," Eustace says.

The spring has a back-sloped hook on the end to help slide past stalks without damage. When mounted on facing sweep wings, the springs overlap each other by about an inch so no weeds escape and no soil is left undisturbed.

The sweeps are suitable to use from first cultivation to lay-by, Eustace says.

They are designed to fit any cultivator.