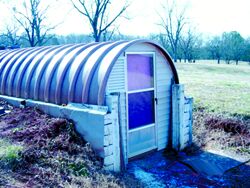 He had a backhoe, a 30 by 8-ft. fiberglass storage tank, a stack of used railroad ties, and some time on his hands. So he decided to try to build his own greenhouse.

First, he cut the tank in half lengthwise, giving him a 30-ft. long section that was 8 ft. wide and 4 ft. high at the center. That would be the roof. He cut off one end to make an entrance.

Using his backhoe, he dug a trench into the side of a hill, making it wide enough to accommodate the roof and deep enough to give him 8 ft. of head clearance in the center. To support the roof, he laid railroad tie support walls on the sides. Dirt was backfilled around the side and end walls. The open end was closed in with wood and a storm door installed.

Once he had the greenhouse together, he spread about 6 1/4 tons of crushed rock on the floor and put 14 55-gal. plastic drums full of water inside the building.

Both the rock and water act as heat sinks to soak up heat and keep the greenhouse temperature consistent. "The water drums also serve as supports for my shelving in the greenhouse'" Nicholson says. "He buried the lower half of each drum in the ground so heat from underground also helps moderate the interior temperature."

Nicholson got the tank from a friend who installs underground storage tanks. He says it has no gasoline odor. "But you could smell the creosote from the ties. I sprayed a sealer on those to try to keep that from being too strong," he says.

He figures he spent about 80 hours to put together. "The next one would go together faster, since I know how to do it all now," he says.