He Grows And Processes His Own Biodiesel 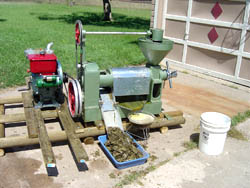 If you can grow crops, you can you're your own diesel fuel, says Dan McAmoil, Penokee, Kan. He recently bought a Chinese-built screw press from an importer-exporter and uses it to squeeze the oil out of 100 acres of soybeans and sunflowers. A Listeroid 2-cyl., 28 hp diesel engine belt-drives the press. The oil produced by the screw press can be used to operate any diesel engine.

He bought the 6-ton (per day) oil seed press from Flint Hills Diesel in Hillsboro, Kan.

"I'm on single phase electricity and it would cost me much more per month in electricity to operate an electric motor that would drive the press. But I can operate the 2-cyl. Listeroid engine on my own home-grown sunflower oil," says McAmoil. "The Listeroid engine uses about two gal. of sunflower oil every six hours. I can press out 15 to 18 gal. of sunflower seed oil per hour. These slow speed engines are known to last more than 50,000 hours with proper care so it's like an endless power source.

"It doesn't take many gallons of fuel to pay the cost of the press and engine back."

According to McAmoil, growing your own biodiesel fuel is far more practical than using cooking or vegetable oil. "There isn't enough restaurant oil within a 100-mile radius of my farm to operate my diesel-powered equipment for even two days. A lot of farmers in the High Plains are starting to buy presses so they can grow their own fuel. One farmer is looking at buying several presses so he can operate five different irrigation engines, using 50,000 to 60,000 gal. of biodiesel fuel per year. He'll hire someone to operate them full-time all year long.

"Growing your own diesel fuel makes economic sense for farmers. I see it as a matter of survival."

McAmoil's press and engine are located inside a machine shed, bolted to a 6-in. channel iron frame. He installed chutes on the press, one for meal or cake and one for oil, and directed them into plastic containers alongside.

A 4-in. dia. auger delivers soybeans or sunflower seed from a 55-gal. barrel into a the hopper on top of the press. The auger is covered with aluminum foil which forms a heat shield, trapping exhaust heat off the engine to preheat the seeds, which results in an extra 3 to 5 percent yield of oil. The Oil drips down out of the press on a catch pan and the meal comes out the other end. The crude oil that comes out is first allowed to settle for three or four days in several big barrels located next to the press. The oil is then filtered as it's pumped out into storage tanks outside the building where unleaded gas is mixed into it. "I use compressed air to agitate the oil with the added unleaded gas mixture. I do this outside just to be safe," says McAmoil.

A pair of old combine augers take meal away from the press and load it into a truck.

The gasoline is used to adjust the viscosity of the oil so it's more like no. 2 diesel fuel. I use unleaded gas to cut the glycerine so I don't have to use a chemical process. During summer I mix one part unleaded gas to 10 parts of sunflower oil, and during winter I mix one part gas to five parts of sunflower oil. This ratio is good down to 5 degrees below zero. I can just pour it into engines and go. Adding the gas results in more btu's per gallon than chemical-made biodiesel, which removes most of the glycerine. The glycerine is the gun powder, so to speak.

"Normally chemicals are used to extract glycerin, but I don't want chemicals in my meal cake because of health and safety reasons for my cattle."

Last year he bought sunflowers on the open market to try out the idea. "I don't have enough oil to run all my equipment on 100 percent homegrown biodiesel at this time.

So I'm running at a 30 percent ratio of oil to diesel fuel because I want to ration out what I have. After this summer I hope to have enough of my own oil seeds to supply all my fuel needs.

McAmoil says the fuel economy on his 1998 Dodge pickup went up 30 percent using a mix of one gallon of unleaded gas, nine gallons of sunflower oil and 25 gallons of no. 2 diesel fuel. "My mileage jumped from 18 mpg to 24 mpg with the sunflower oil diesel blend. Adding oil to the fuel also saves wear on pumps and injectors and adds to engine life. Cattle love the meal and several small local feedlots want to buy meal from me," says McAmoil.

According to the Flint Hills website, canola and sunflowers are suitable fuel crops. Soybeans and cotton seed can be pressed but should be dehulled first. "From what I've read on the internet in Germany, Canola is the best fuel oil of them all," says McAmoil.

Flint Hills plans to soon offer electric-powered presses with capacities up to 10 tons/day. "A 10-ton press could produce up to 1,000 gallons of pressed oil per 24-hour day," notes McAmoil.