Rotary Mower Was Ahead Of Its Time 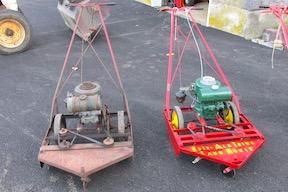 Dave Stehman remembers his father and grandfather mowing cemetery plots in small-town Pennsylvania using a manual reel mower. Although the mower worked reasonably well, a second pass with a scythe was usually necessary to cut the tough grassy spikes that remained standing.

In the 1930s, inventor Adam G. Fahnestock moved to nearby Lancaster County and developed a mower based largely on the horizontal scythe. He received a patent in 1940 for his invention, which he dubbed the Kuts-Al & Trims mower.

It was years ahead of its time, says Stehman. I feel it was the first rotary mower ever made. Everything patented after was patterned after his invention.

His original mowers were driven by either a Tecumseh or Wisconsin motor running horizontal shafts and gearboxes above the blades. Later models did away with the gearboxes as they didnt stand up well to the rough workload. Instead, they used a vertical shaft with a belt drive and pulley system.

They didnt throw grass everywhere and ran very quietly. The 2-in. long high carbon steel flail blades were bolted to long bars that ran constantly. The Kuts-Al & Trims mower would cut evenly in one pass and take care of all the tough grass and weeds, he says.

Blades spun at approximately 6,000 cuts per minute, cutting right to the edge of the frame. No adjustment for raising or lowering them was possible.

The mowers were also self-propelled with semi-pneumatic wheels driven by a separate belt on the motor.

In recent years, Stehman began collecting and rebuilding the various models and owns several of the Kuts-Al & Trims mowers.