Mini Combine Is A Baby Stroller 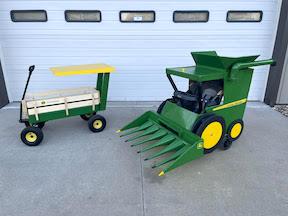 Taylor Neths son, Braxton, is off to a good start loving farm equipment. He has a baby stroller that looks like a Deere combine with a corn head and a coaster wagon with a 4020 ROPS canopy for shade. It all started with an image off the internet.

My wife shared a picture she saw of a combine stroller, recalls Neth. I told her Id build one when we had a baby.

I covered the frame with cardboard, he says. The cab has a pull knob on the roof that looks like a GPS antenna. I lift it to set my son in the seat. The grain bin top is where his baby stuff rides.

Getting the grain bin shape right required partially cutting through the cardboard to allow it to bend. Once bent, Neth taped it into place.

Multiple layers of cardboard were combined to make the dual front wheels. I wanted them to look thicker to be more realistic, says Neth.

Neth made the 36-in. wide corn head removable for ease of transport. The realistic-looking snouts are made from plastic oil funnels. To get the right size, Neth had to go to the internet. The funnels hang from a length of pvc pipe. Small diameter pvc pipe serves as support struts for the cab roof. He also used pvc pipe for the grain auger. Initially, it could swing out like the real thing. However, it started to sag so its now secured to the side of the combine.

The final step was the paint job. My dad had aerosol cans of Deere green left over from his 4020 restoration, says Neth.

By June the stroller was finished, just in time for the local Camp Creek Threshers festival. Each year a different brand is featured, and in 2021 it was John Deere. When the Neths showed up with their combine stroller, it was a big hit.

People loved it, taking pictures and asking about it, recalls Neth. It was a fun way to show it off and introduce my son to the event.