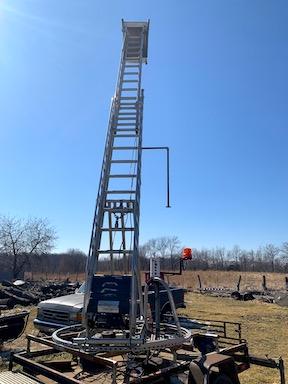 Tom Chaneys 35-ft. power ladder goes where a bucket truck cant thanks to the trailer its mounted on. With the ladder turntable mounted over the axle, the trailer can be unhooked from the towing vehicle and pushed into place by only two men. Once in place, the ladder is raised to the desired height so the user can climb up and into the man-bucket for safe work.

The power ladder is completely self-contained, says Chaney. I replaced a small winch with a 2,500-lb. electric winch to raise and lower the ladder and the bucket. Its powered by two deep cycle batteries.

An electric motor, also powered by the batteries, rotates the ladder, adds Chaney. I mounted a small gas engine on the ladder base to drive a 220-amp alternator that charges the batteries.

Chaney first built the trailer and then added the ladder with its 5-ft. dia., 360-degree rotating base. He had given a friend $125 for the ladder unit, which had been sitting unused. It was previously mounted to an electric company van. Comparable new power ladders sell for $25,000.

His outlay for the trailer was even less. I paid $100 for the 10,000-lb. axle with spring shackles, says Chaney. The trailer frame is made from pallet racking Id salvaged. A friend had the plate steel lying around and gave it to me for the trailer deck. I whipped it out over a weekend.

Chaney bolted the ladder base to the trailer at eight anchor points. Although it was extremely stable as is, he added outriggers to the trailer. He also built a control box for ladder extension and rotation and added it to the bucket.

Its not as safe as a bucket truck, but its better than any ladder, notes Chaney. I can set it up close to my barn or another building and still have room to maneuver in the bucket.

He appreciates the materials he got from friends that kept costs to a minimum. He notes that there is a lot of sharing back and forth. Everybody helps each other out, says Chaney. Plus, they all know where the power ladder is if they need to use it.