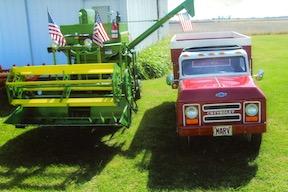 Marvin Copenbarger has built more than 20 replicas of tractors and farm implements, several described in FARM SHOW articles (Vol 25, No. 5; Vol 45, No 6).

I own a 1964 Deere Model 45 self-propelled combine and decided to build a 1/2 scale model for parades, Copenbarger says. Just about everything on it is half size to the real one Ive got in the shed, except for a larger operator platform. I needed that so Id have a comfortable place to sit and drive it in parades.

Always looking for authenticity and features that attract attention, Copenbarger built a direct cut grain platform for the combine with a scale model reel that turns as he drives the machine.

The chaff spreader also turns so that people watching the parade can see something moving, he says with a laugh. The combine measures about 12-ft. long and 6-ft. tall, slightly higher when the discharge auger is extended. The small diesel engine that powers it sits on top of the threshing chamber, accessible with a small step ladder. If someone wants to get picky, they can see that my model has a square back and real ones have a rounded metal chamber, Copenbarger says. Otherwise, everything is pretty much real.

After finishing the combine, Copenbarger decided a nice addition would be a truck for hauling the make-believe machines grain. That led him to fabricate sheet metal and other parts into a 1/2 scale model 1969 C-50 Chevrolet grain truck. Its painted the authentic 1969 Chevy red color and includes the blue insert bowtie emblem on the hood, Copenbarger says. It has a 4-ft. wide by 6-ft. long grain box that raises and lowers with a tiny motor. The headlights and clearance lights work, and it rides on 12-in. wheels with duals in the rear.