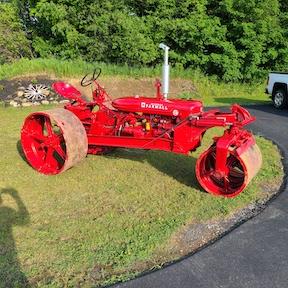 When Scott Dalrymples Super C Farmall burned up, about the only thing he didnt have to replace were tires. His Super C was a sod roller with all steel wheels. Unlike some older roller adapted tractors with small front steel wheels, Dalrymples had a large front roller.

The front roller is 31-in. wide, and the rear roller wheels are each 18-in. wide, says Dalrymple. When I was young, my dad used it to roll a runway for a small Cessna he flew. Later he did construction, and he used it for landscaping around sites and for rolling our lawn.

Dalrymple inherited the tractor after his parents died and brought it to his home. Stored along with some other items in a woodshed, it burned up when a nearby outdoor stove overheated and went up in flames. With the help of a local mechanic friend, he started on the restoration.

The roller is connected to its frame with a double knuckle, allowing it to flex over uneven terrain. A shaft that passes from the upper knuckle through the front of the frame ends with a cross arm for steering.

Originally the steering involved a big worm gear in a cradle on the shaft, recalls Dalrymple. It required constant cranking to turn the tractor. When my dad got older, that got difficult, so he replaced the steering and worm gear system with a hydraulic cylinder.

Dalrymples dad flipped the cradle with the worm gear over and welded a straight draw bar on it and a tab on the frame to pin the cylinder. He ran the hoses back to the upright on the platform, installed a valve there and steered with it, explains Dalrymple.

To restore the burned tractor, Dalrymple took it apart completely. We replaced all the belts and wiring and changed out the carburetor, he says. We also replaced the gas filter and distribution cap. Anything that could melt did and had to be replaced. The generator wasnt producing voltage because the fields had melted together and had to be rebuilt, as did the starter.

After making needed repairs and replacing fluids and a battery, Dalrymple tried firing it up. The starter wouldnt turn over. When he tried the flywheel, it wouldnt turn either.

During the 8-month sandblasting period, the tractor sat outside. The valves were stuck.

While it slowly turned over, the battery didnt seem to have enough power. Dalrymple discovered the distributor was grounding itself out. Once he installed a non-metallic washer, the tractor started running.

Dalrymple discovered one part that hadnt been cleaned properly. All the debris in the exhaust system from sitting for years and then ash from the fire all blew out like a rainstorm, he says.

With the tractor running well, Dalrymple replaced the decals.

After working on this one, I thought it might be one of a kind, says Dalrymple. However, my mechanic ran across another similar tractor sitting in a grove of trees. It appears someone at some point was manufacturing these.