Crimp Cover Crops In The Row 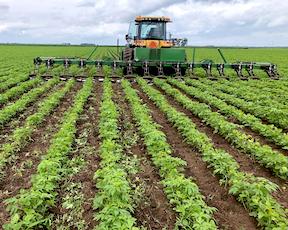 Planting and growing cash crops in living cover crops is easier with InRowl rolling/crimping units. The row units from Dawn Equipments Underground Ag division are designed to be used at planting, post emergence and pre canopy. Flexible mounts allow the InRowl units to be adapted to a variety of rolling/crimping widths simply by changing their angle.

The current design is for 30-in. row spacing, but as we progress with the InRowl units, other sizes may be added, says Justin Landeck, product manager for InRowl, Underground Agriculture. Over the past 2 years, we have added options to make it more adaptable. It can be used to terminate a cover crop, suppress a nitrogen producing cover crop, control weeds or suppress a living green mulch. It gives northern growers time to get added growth before rolling/crimping.

InRowl units share technology with the companys ZRX roller/crimper, including heavy-duty bearings and chevron pattern rollers that pull material into the center of the row.

When soybeans begin to canopy, the angles can be reversed to lift the cash crop up and out of the way while fluffing crop residue, says Landeck.

InRowl comes with either hydraulic or spring pressure to pivot the link arm. Initially, each unit was independent. They are now controlled through a manifold block on the toolbar. Units are typically mounted on a 7 by 7-in. toolbar of up to a 40-ft. width.

The InRowl units also have potential for mechanical weed control, says Landeck. If weeds cant be managed with traditional herbicides, InRowl can control them with minimal soil disturbance.

Loran Steinlage worked briefly with Underground Ags RowMow, an in-row mower before it was shelved in favor of the InRowl. For the past 2 years he has been working with Dawn on the InRowl units and recently displayed them at his annual field day. Technologically much simpler, they also cost significantly less. The RowMow cost $10,000 per row unit, recalls Steinlage. InRowl is only $1,500.

Steinlage has used InRowl units to delay cover crop termination in soybeans and to suppress cover crops in corn. I plant corn in overwintering clovers and alfalfa, but I want to knock them back until the corn gets ahead, he says. I crimp them once at planting and then make 2 to 3 more crimping passes with the InRowl units.

Steinlage reports harvesting 130 bushels per acre with no inputs aside from the clover and alfalfa. The yield would have been much higher if not for heavy deer and turkey pressure, he adds.

Optional sharp blades can be bolted to the rollers. They were developed in response to pre-production user actions.

The first thing they did was sharpen the rollers to better terminate cover crops like rye, says Steinlage. However, they found that if they used them on alfalfa, they cut the stem, which stimulated regrowth. The blades can be bolted in place or removed, depending on the target cover crop.