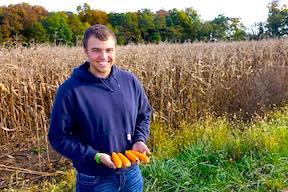 First generation farmer Gavin Spoor kicked his farming operation into gear with popcorn sales. Having worked for area farmers while in high school, he rented 6 acres in 2017 while in college and planted soybeans. Faced with low commodity prices, he began looking for an alternative crop.

In 2018, I planted 15 acres of popcorn, says Spoor. I talked to a few popcorn farmers and watched some videos, but I didnt know how much I didnt know.

What he did learn was that he could sell his popcorn at a premium, once he learned how.

When I wasnt in class, I would walk into grocery stores and ask what it took to sell products in the store, recalls Spoor. The managers shared information on barcodes, nutrition information needed, and tamper proof packaging, as well as what margin they needed.

Once he had popcorn to sell, he went back to the same stores and talked about what he would charge and how he would keep them stocked. Three years later, many of them are still in his core set of stores.

Spoor also got busy on the internet, posting videos from the field as the corn grew, from planting to harvest. With the help of a college roommate, he set up an online presence where people could order his popcorn. The social media presence worked and expanded his marketing footprint from local stores to a nationwide marketplace.

Website sales have consistently climbed since I started, says Spoor. Around Christmas 2020, I sold more in one day than I did the entire first year.

In the past 3 years, Spoor has sold popcorn to online customers in all 50 states. He has also educated them and others about corn in general and popcorn in particular. This summer one of his videos was posted on BuzzFeed News, a national internet news site.

A lot of my online orders come from people who have seen one of my videos on Facebook, Instagram or TikTok, says Spoor. A lot of people dont know the difference between regular corn, sweet corn and popcorn. It is fun to educate them and open them up to things they didnt realize existed.

Spoor has been through his own educational process. In 2018, his first crop suffered wind damage. As a result, he ended up harvesting ears from stalks laying on the ground.

I vacuum packed them as ears and sold them as a cool way for kids to see the cob the kernels grow on, recalls Spoor. On-the-cob popcorn has ended up being one of my most popular products. Most of our popcorn is sold in bags and jars for retail and online sales but we also offer 50-lb. bags for bulk sale to kettle corn companies and concession stands.

He also learned about changing markets. In 2019 he increased to 40 acres of popcorn, but when COVID hit, his sales took a hit too. Excess production went to a local ethanol plant.

Go to his online store and you can order six ears for $11.95 or 28-ounce packages of either yellow or red popcorn for $6.95. He also sells can koozies, T-shirts and hats.

I once ran a special where I gave away free koozies with orders, says Spoor. It was amazing how orders went up. Being creative with marketing really helps.

While popcorn prices have helped kickstart Spoors farming career, conventional corn and soybeans havent been overlooked. The aggressive young farmer has gone from those first six acres to more than 700 acres spread across 106 fields; small fields no one else wanted.