Made It Myself Pto Power Unit 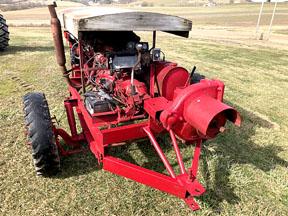 William Davis was looking for a way to power a silo blower without tying up a big tractor. He ended up building a 2-wheeled, pull-type power unit from a junked-out car and other parts. Its powered by a slant 6 engine from a Dodge car that drives a 540 rpm pto.

The unit rides on the axle and wheels off a 1-ton IH truck. A governor thats belt-driven off the fan maintains engine speed.

We built it when we bought a bigger silage blower, and our Farmall M didnt have enough power to operate it at full capacity. It does a lot of heavy work and eliminated the need for another tractor, says Davis. Another advantage is that I can control and operate the unit from ground level, instead of having to get on and off a tractor all the time.

The engine is coupled to the final drive off a Deere 4400 combine. The final drive assembly reverses and drops the pto speed to 540 rpms. Its offset to one side, which provides extra clearance for tractors and wagons to pull alongside, says Davis. The engine and transmission came from a car that had been wrecked in a demolition derby. We usually run the transmission in high gear. We kept the cars instrument panel and hooked the speedometer up to the transmission, and find that running the engine at 100 mph translates to 540 rpms on the pto shaft output.

Davis used 4-in. channel iron to build the power units frame. The gas tank was salvaged from an old MF self-propelled combine. He installed a lever on the foot-operated clutch that came with the car, converting it to a hand-operated clutch. A timer-controlled ignition allows the operator to run and then idle the engine for cool-down time before the engine automatically shuts off.

Davis sold the power unit a few years ago to a neighbor. He still uses it on his silo blower, and also to operate a hammermill that grinds feed for his cattle, notes Davis.