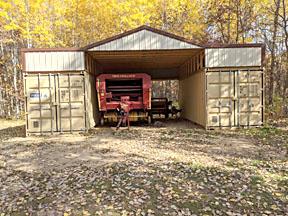 After his hoop building collapsed last year under a heavy snow load, Minnesotan Dan Koch decided to put up a much sturdier structure on his property near Akeley, Minn.

He started with two locking 20-ft. shipping containers that he bought from a container reseller. Used containers generally sell for $1,500 to $3,500 apiece, depending on location.

Koch planned to run trusses between the two containers but he needed more clearance to store his New Holland baler, Oliver tractors, and other equipment underneath.

Ive got lots of storage now and it should never fall down, says Koch.  I designed it so I can add sliding doors later to either end.