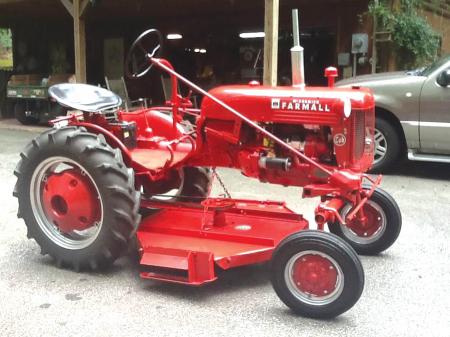 Dave Wilson makes old Cub Cadets look like new. He only works with the original models sold from 1947 to 1953, cleaning them up and quickly selling them along with one or more implements. He lists them on Craigslist and on Facebook under the Farmall Cub Rebuilders Group.
I restore them completely, tearing each one apart and then rebuilding from the front to the back, a piece at a time, says Wilson. The longest Ive held on to one after restoring it is 2 weeks.

Wilson tells of one Cub that went online at 9 p.m. He had a call from a fellow at 9:15 asking if he could pick it up that night. Wilson suggested he get it the next day.

When I got out of church the next morning, he was waiting, says Wilson. He bought the tractor and 3 pieces of equipment to go with it.
Wilson always restores at least one piece of equipment for each Cub. He notes that finding the old Cubs and equipment is increasingly becoming a challenge.

I pull them out of the woods or old barns, he says. You should see what they look like, all covered in dirt and grease.

He compares buying one to buying a pig in a poke. He often doesnt know what he has until its cleaned up.

The most I ever paid was $1,600, but it was in really good shape with a new set of tires, says Wilson. I went through the engine, replaced seals, bearings and gaskets, and replaced the main bearings in the rear.
Perhaps the worst case was one that was covered in dirt and grease. He paid $900 for it.

When I cleaned it up, I found the bottom of the radiator was split wide open, and both rear axle housings were cracked, recalls Wilson. I ended up putting $2,200 to $2,300 into it and lost money when I sold it.
Wilson usually sells a tractor and implement for around $3,500. The buyer who took a tractor and 3 implements paid $4,500.

Soon to be 80, Wilson has restored 15 Cubs since retiring in 2015. Its a skill he learned the hard way, but doesnt plan to stop anytime soon.
I read some service manuals and just started doing it, he says. I have number 16 in my workshop now and 2 more waiting. I plan to keep doing this until the Lord calls me home.