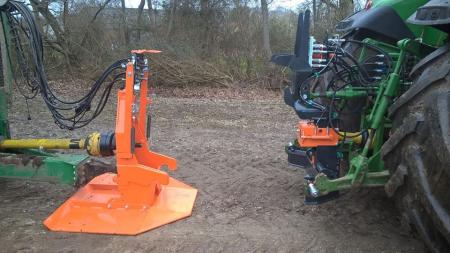 Rasmus Helms grew up on one of Denmarks largest organic dairy farms, spending thousands of hours getting on and off tractors while using a variety of implements to clean yards, load wagons, and feed animals. During those years an idea gelled in his mind about hooking and unhooking implements without leaving the tractor seat.

First educated as a mechanic and later as an engineer, Helms started his own company to build and market the Combi Hitch System in 2012. Helms says his invention lets a tractor operator hook and unhook implements, including pto, hydraulics, and all electrical connections, without leaving the tractor seat. His first-generation product was used primarily for pulling trailers behind a forage harvester or tractor. The system gained popularity and customers began asking for a version that could also connect a pto shaft, which Helms introduced in 2016.

Steen N. Jensen, sales and marketing director for SIWI Maskiner, the manufacturing company, says the Combi Hitch now on the market can be used on different trailers, spreaders, feed mixing wagons, seed drills, and tillage implements. Our typical customers are large farms and contractors, where they want to be more effective and save money while being able to do a lot of jobs with one tractor and one operator.

Jensen says an operator using the Combi Hitch system can unhook a feed wagon or a manure spreader within seconds, use his front loader to fill that implement, then hitch on again without leaving the tractor cab. The system hooks and unhooks the same way every time, allowing even operators who have problems climbing into and out of a tractor to work safely and productively.

We have customers with disabilities who want to return to their jobs despite missing legs or paralysis, Jensen says. These operators are very grateful that a product like ours can help them continue farming even after serious injuries.

The Combi Hitch, which works on tractors from 130 to 450 hp., easily connects hydraulic, pneumatic, ISOBUS, CANBUS, standard trailer light, and all kinds of control boxes. The companys first system in North America was sold to an Alberta cattle farmer in January 2019, where Jensen says the temperature was 31 degrees below zero, a harsh environment where the hitch worked without any problems.

The rancher bought the system because of its safety and effectiveness, Jensen says. He has two cattle farms and his son is working alone on one farm during winter to feed 800 cows. Staying inside the tractor during all operations was the ultimate security for the father, and at the same time he saved money by not needing an extra loader running all the time to keep hydraulics warm. Later in 2019, the rancher invested in extra trailer modules, so when feeding was done, he could unhitch the feeding mixer and hitch a bale processor for further operations. This is a scenario we see more and more in Europe, where large contractors only want to use one very good tractor with a front loader, and then use our system for easy changes between different implements and trailers.

A Combi-Hitch system includes the carrying module that mounts on the tractor and attachment modules that mount on implements or trailers. The tractor module fits on a standard 3-pt. hitch and accommodates up to 8 hydraulic couplers and two 7-pin power plugs. The Canadian distributor is Future Ag (www.futureag.ca; ph 403 343-6101). Jensen says the company is still looking for a U.S. distributor to handle the product, which sells for $19,997.

Check out the video of the system in action at www.farmshow.com.