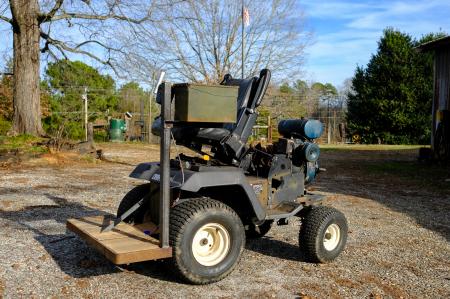 Ed Moller turned an old riding mower into a powered cart for getting around the farm. He also finds it handy for trips to flea markets and tractor shows.

"When you get old and decrepit, it's hard to get around," says Moller with a laugh. "I was looking at a pile of junk mowers and came up with the idea of a gas-powered cart I could ride."

He started out with the chassis of an old 6-speed, 42-in., Craftsman riding mower. It had the shifter on a fender, which would allow him to reach it even though he was reversing the operating direction of the old mower.

"I decided to mount a seat over the old rear axle and a motor over the former front axle and turning wheels," says Moller. "On most other mowers, the shift would have ended up behind the seat."

He stripped away the mower's seat, steering, engine and most of the controls. He shortened the frame by 13 in. and reversed the rotation of the transaxle to match the position of a new engine.

He mounted a Kohler K161 cast iron engine over the "rear" steering wheels. It helps counterbalance the seat and rider. He also added a 1200-rpm centrifugal clutch. It lets him control his speed with the gear drive transmission without running the engine wide open.

"When I'm in first gear, it just crawls along, but it moves pretty fast in sixth," says Moller.

The new seat came from an older Kubota tractor. The footrest platform came from 3/8-in. iron freight guard from an old forklift cut down to fit.

"I wanted the platform heavy enough that if I ran into something, I wouldn't crush my feet or legs," says Moller. "I mounted a bar at the rear of the platform and connected it to the disc brake on the transmission, originally a parking brake on the mower. It is my emergency brake."

The heavy-duty platform also serves as a base for steering and throttle controls. Moller mounted a 1 by 1-in. steel tube perpendicular to the platform. A 2 by 2-in. box made from rectangular tubing is attached to the upper end of the upright tube with a single bolt, allowing it to rock backwards and forwards. The throttle cable is attached to the upright tubing at the box. Rocking the box forward or back controls the throttle.

The box also serves as a mount for his steering control system. It consists of a double pole, double throw, momentary switch connected electronically to a linear actuator on the steering axle. Moller rotates the switch left or right to change the direction of the mower, and it automatically comes back to center.

"I installed a panic switch at the end of the control switch for emergencies," says Moller. "It took a little to get used to the steering, but you get the hang of it."

He also mounted an old ammunition box to the upright. It serves as an armrest and a lock box. "It is a handy place for my wallet and keys when I'm riding around at a flea market," he says.

Moller reports making a few changes since the accompanying pictures were taken.

"I've put 3 little deck wheels under the foot rest platform," he reports. "If the cart's back end should ever rear up, they will prevent the platform from digging into the dirt. I also added a protective grill over the engine. It folds down to hold a basket or small ice chest."