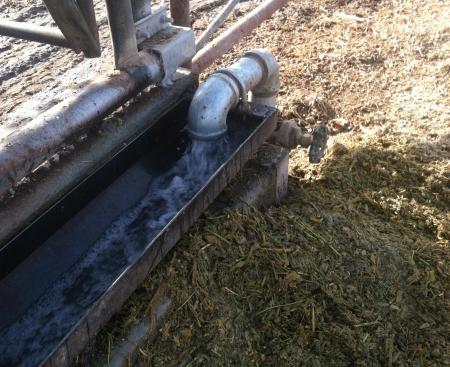 Dean Swager keeps his dairy herd well-watered with constantly running water at their feed bunks. His patented watering system lets them alternate bites of feed with a drink of water. He says the result is more milk with less feed.

"I assumed that having constant access to water would drive feed intake, but they actually eat a little less and become more efficient with the feed they do eat," says Swager. "With this system, a cow goes to take a drink and takes some bites. She doesn't slug eat or slug drink."

Swager's water trough is part of a closed loop system that ensures clean, fresh water with limited labor. Its a system hes been thinking about for 40 years.

"Ten years ago I decided that if I didn't build it, the idea would die with me," he says.

Swager has feed line water troughs in three, 100-cow pens at his 4,200-head dairy. Eventually Swager plans to have his entire dairy equipped with the troughs.

With his system, water flows by gravity to the troughs from a 10,000-gal. tank housed in a weather and bird contaminant-proof shed. The troughs are sized for an average Holstein muzzle width, but could be adapted to any species' muzzle size, adds Swager. When the cow puts her muzzle into the trough, she blocks most of the flow of water, allowing her to take a deep drink. Theres enough water flow to reach the next cow in line while carrying away any feed particles.

At the end of each trough, the water gravity-flows through underground pipes to a screened filter. The graduated filter traps solid particles.

Once past the filter, the water is pumped back to the water tank where it recirculates through the system. Once a month, Swager flushes the entire system and fills the tank with fresh water.

The only other labor involved in the system is to periodically power wash the screened filter. Swager describes that as an occasional 10 or 15-min. job versus hiring a worker to clean waterers daily.

The gravity fed system also eliminates nearly all float valve maintenance. Swager cites the work involved in repairing and replacing the 100 float valves used for the rest of his herd.

"I always have a couple messed up," he says. "With this system, I have only one float valve, and I don't have to worry about waterers freezing up. We've had temperatures down to 10 to 15 degrees below zero, and it keeps working fine."

Unlike with central waterers, boss cows don't keep others away. While modern dairy plans allot inches of water space per cow, Swager's cows have 2 ft. of water access each.

"Even the newest facilities allow only 10 percent of cows to drink at any one time," says Swager. "After cows drink at central waterers, they tend to go lay down. With my system, 100 percent of the cows can drink 100 percent of the time. Plus, they poop where its easiest to handle the waste, not around water tanks."

He notes that his system offers new facilities tremendous savings over conventional waterers. "With my system, you don't have to plumb with pressurized systems past the front of the dairy," says Swager. "You could save hundreds of thousands of dollars by laying fewer slabs and water pipes."

Swager notes that his closed loop system makes it easy to treat the water supply with chelated minerals or other inputs.

"The warmer the climate, the more advantageous it is," says Swager. "This is especially important when cows are locked in feed line stanchions for breeding and veterinary checks. Time is not an issue, as the cows have everything they need, both feed and water."

Swager continues to track the impact of the watering system on his cows, comparing it to his conventional watering systems. Based on his experience, he is convinced it would benefit dairies of any size, from 100 cows to 10,000.

"I am looking for ways to bring this system to the public," he says. "I'm hoping to find a company to market it commercially in the future."