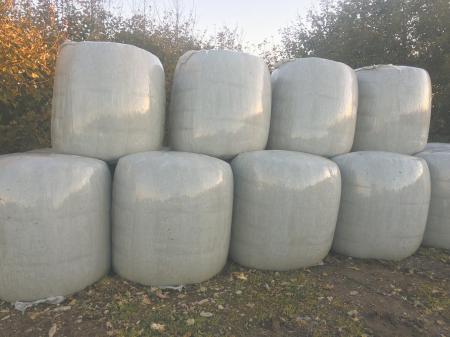 A new additive for plastic wrap and bags keeps rodents, birds and raccoons away from hay, silage and grain. The specially treated plastic keeps grain and forage in top condition.

Once rodents, birds or raccoons break through plastic wraps and bags, other animals are attracted to the smell, says Elizabeth Omet of Protexia Agrirepel.
When farmers near the companys headquarters in France reported losing 30 to 40 percent of their bales each season due to bird punctures and resulting mold, company researchers started looking for a solution.
We found an organic product that can be added during the plastic extrusion process that repels problem animals, birds and bugs, says Omet.

The product called Combirepel is an additive in the plastic making process. It has a life span of 2 years in the plastic and doesnt transfer into the environment. It is a non-toxic, environmentally safe repellent made from essential oils and other natural ingredients. By repelling the pests, it teaches them to stay away, creating a no-pest zone.

Protexia has introduced Agrirepel in 8 countries, including the U.S. and Canada. Despite being told the North American market was only interested in the lowest cost, Omet says premium priced Agrirepel is being well received. Initially, sales were direct to the farmer, but retailers and distributors are now showing interest.

People in the dairy industry tell us the Agrirepel-protected silage and hay is higher quality, says Omet. The cows are producing more milk and are healthier with fewer foot and skin problems because they arent eating moldy feed.

She notes that an Agrirepel grain bag can cost as much as a dollar more per foot than non-repellent bags. When you can lose tens of thousands of dollars to spoilage, doesnt it make sense to spend more to protect it? she asks. A wrapped 3 by 4 by 7-ft. bale can be worth $200. With Agrirepel, you not only protect it for seldom more than a dollar more per bale, but you spend less time checking for damage and trying to repair it.

Omet points out that while the protective bale wrap can be more expensive per foot, actual cost can be less. Agrirepel is made from the highest quality, virgin LDPE (low-density polyethylene) and is coated with an adhesive that seals tighter and doesnt unwrap in the wind.

Our customers report using fewer wraps than they would without the repellant and adhesive, says Omet. Many use 8 to 10 wraps and as many as 12 trying to keep animals out. With Agrirepel, you only need 6 wraps per bale.

Omet says the company is looking for distributors and dealers in North America.