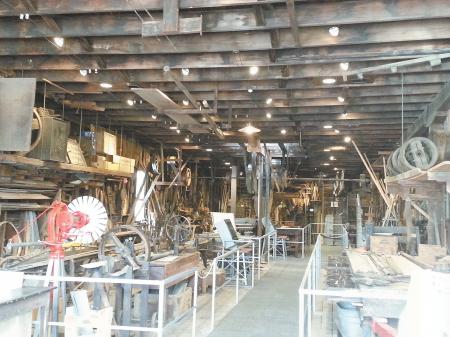 The Kregel windmill factory closed in 1991 and reopened as a museum with one of only 13 line shaft systems left in the U.S. Line shafts systems were common in factories and shops in the 19th and early 20th century. A central shaft driven by an engine, electrical motor or water wheel, powers various belt-driven tools.

The line shaft and all the belt-driven equipment still operate, says David Flatt, Kregel Windmill Factory Museum. The last windmill built by the company was the same design and produced the same way as when the factory was built in 1902.

Tools include a metal turning lathe built in 1865 and a power shear, punch and riveting machine built in 1875. Most of the tools, like saws, drop hammer, joiner and grinders, were manufactured in 1900 or 1910.

The Kregel Windmill Company produced approximately 1,000 Eli brand windmills over its 112-year history. However, its the only surviving factory of the 1,500 windmill companies that once operated in the U.S. Its revival as a museum is unique.

When the 93-year-old owner died, the factory was closed, explains Flatt. The Kimball and Ward foundations and others approached heirs to the estate suggesting setting it up as a non-profit museum and offered to raise operating funds.

While everything inside the building worked perfectly, the structure needed work. The tin plate exterior was removed piece-by-piece, numbered and stored. Once repairs were made, the tin was replaced.

The interior is a time capsule of factory life 100 years ago or more. Not only tools, but also ledger books on shelves, pencils and pens on the desk, even an overcoat on a hook remain where last used. More than a million and a half artifacts can be found in the building.

It even smells like an old factory, says Flatt. The only changes were to remove excess pieces of pipe and towers so people could walk around. It is handicapped accessible, and we installed computer kiosks with informational videos.

The Eli is a direct stroke windmill with no gears to go wrong, explains Flatt. Most were sold within a 50-mile radius of the factory, and about 100 are left.

The museum is open year-round Tuesday through Sunday. It hosts special events and lectures, as well as tours for around 3,000 visitors each year.