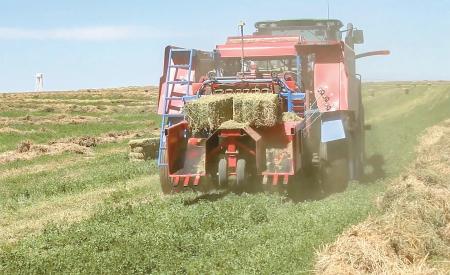 The farmer-built Twin Pak baler punches out small bales with big baler efficiency. New Mexico custom hay harvesters Jason Grady and his father Mike designed the double Twin Pak baler, which reaches about 85 percent of the tonnage per hour a big baler can produce and 2 to 3 times more bales than the fastest small bale balers on the market.

Our first attempt at the Twin Pak was ugly, but it worked perfectly the first time, says Jason Grady. We cut apart 2 old balers and put them back together behind  a big baler pickup. We started it up in the shop rebaling hay and then took it to the field.

To get the productivity they were after, they used a single big-baler style pickup and a plunger that not only presses each flake, but also cuts it in half. Each half bale is triple tied. As the bales exit the baler, they drop in an offset pattern for ease of pickup by stackers.

While the current prototype is anything but ugly, Grady says the next generation will be even better.

GK Machine in Donald, Ore., has been re-engineering it for mass production, says Grady. They have put in a new gearbox with a forward facing flywheel like big balers have and made other improvements.

Creating the Twin Pak was an economic necessity for the Gradys. In addition to their bale handling equipment business, Grady Press Trailers, they operate J&M Baling. The company does custom harvesting of 4 crops of 23,000 acres of alfalfa and 2 crops of triticale on 3,000 acres. The contract requires a combination of small and large bales, but the profit margin on small bales was minimal.

Economics change radically with the Twin Pak. At about 600 small bales an hour, it can nearly replace 3 self-propelled Freeman balers or 2 Hesston small balers, but with a single tractor and operator.

The on-board computer system tracks flake count, moisture and hydraulic temperature, as well as bale count for the field and lifetime. It shifts tension as the bale is formed and indicates adjustments for the operator to make to keep bales consistent.

With room for 30 rolls of twine, the Twin Pak can produce 11,000 bales without reloading. It also has an auto-lube system that can be adjusted for frequency and length of time lubricating. A proprietary valve can be opened to release tension for hand removal of bales. Once closed, tension is automatically reset to the previous level.

As a custom hay harvester, Grady knows the value of a well-built machine. Some of the Freeman balers they currently use have up to 27 years in the field.

The Twin Pak has steel in it like a Freeman, he says. It is built to last 20 years or more.

With 2 on the ground now, Grady plans to have 5 more units in the field for the final testing in the 2019 season. Three of those will be used by J&M, one will be in California and one in Washington State. He expects to be ready to take orders for delivery in 2020.

We are shooting for a price comparable to the cost of 2 new Freemans, says Grady. A Twin Pak should come in at around $235,000.