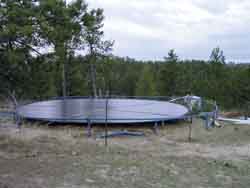 A Montana rancher has invented a way to catch rainfall in remote pastures and store it, using a giant poly "trampoline".

Wayne Kucera says his "rainfall catcher" provides a reliable source of water in areas where no natural water is available.

"It lets me make use of all my pasture land, even where there's no water. It makes pastures practically drought-proof and the unit can be quickly taken apart and moved to another location," says Kucera.

The system relies on gravity, using a 30-ft. dia. poly tarp to collect rainfall, which flows through pvc pipe to a storage tank. The tarp is stretched across a round frame made from sq. tubing that rests on adjustable legs. The tarp slopes inward to a center-mounted, 4-in. dia. aluminum drain that rests about 3 ft. off the ground. Water flows out of the drain into a big metal funnel, and into the pvc pipe. The 7,000 gal. storage tank Kucera uses feeds water into a small livestock tank that operates off a float.

"I've used this system successfully for 5 years in a remote pasture where the nearest water is 1 1/2 miles away. When the weather gets warm the cows won't go to that pasture because they have to walk too far to get a drink. My system catches about 700 gal. of water from just 1 in. of rain. The only limitation is that the water-collecting tarp has to be higher than the tank or it won't work.

"Keeping the tarp up off the ground prevents rodents from chewing holes in it. Another reason I don't let the tarp contact the ground is because when rain falls on the tarp, it pools, and pushes the tarp down too far. The middle part of the tarp has to be at least 3 ft. off the ground in order to keep the drain from bottoming out. If the tarp bottoms out, the water won't drain adequately."

Kucera says he tried building a square tarp system but found that the wind would catch the corners and blow it away. "A round tarp isn't affected by wind nearly as much," he says.

Setting up the tarp is simple, he says. "First I slip the legs together, and then I slip the round frame onto the legs. After adjusting the legs to make sure the tarp is level, I use set screws to hold the legs in place. I use turnbuckles to pull the tarp tight. Straps on top of the tarp are used to secure it."