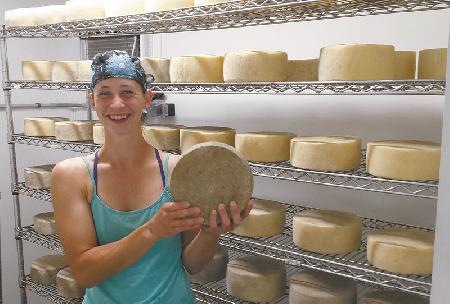 When Katie Bonow won a goat as a 12-year old 4-H member, she never imagined it would eventually lead to having a herd of dairy goats and a cheese-making business. Sixteen years later, she now milks 24 does, all descended from that one goat.
"I call her the goat that launched a thousand wheels of cheese," says Bonow, owner of Capra Nera Creamery. "She was a Nubian, but I've been crossbreeding ever since. The herd now includes Alpine, Saanen and American Lamancha bloodlines."
Bonow may have fallen in love with her first goat, but it was excess milk that introduced her to cheese. In the first 4 years her herd grew to 9 head.
"We couldn't drink all the milk," she recalls.
She credits her mother and a couple of neighbors with teaching her the craft. Her interest and experience making cheese grew while in college.  Time spent at a Vermont artisanal cheese making course, combined with work on several Italian farms sparked the passion. She returned to Italy after college and worked at a goat dairy farm.
As she began to consider options, 2 people helped the transition to goat farmer and cheese-maker in particular. One was her mother, who maintained the growing goat herd during college years. The second was her fiance and now husband. A dairyman himself, he knew the way to her heart was to help her farm.
"We bought a neighboring small farm 2 years ago," says Bonow. "I do all the work with goats, as he is busy with the family dairy. He provides quality control (tasting) and helps with machinery as needed."
With the help of family and friends, she gutted and rebuilt the double-4 herringbone parlor once used for dairy cows and moved her goats in. She quickly went from milking 6 goats by hand to a pipeline and a single-6 herringbone set-up for goats. Eventually it will be upgraded to a double-6 as the herd grows. The other half of the parlor has been turned into a milk house. The former milk house became the cheese-making and aging room.
With 24 does to milk, Bonow has purchased some goat specific equipment and adapted dairy cow equipment when possible. One such unit is the bulk tank, which has family connections.
"It is the bulk tank that my parents bought when they were first married for the dairy that they still operate," says Bonow.
The cheese vat was a tougher find. She bought a used 30-gal. vat 4 years ago and expects to outgrow it this summer.
"Vats are very expensive new and are hard to find used," says Bonow. "We bought this from a gentleman in New York."
She makes raw milk cheese exclusively, which has to be aged for more than 60 days. Since starting, she has found markets for her cheese at several area stores as well as selling direct. This past winter she offered a package of 1 1/2 lbs. of multiple types of cheese for $30, plus postage for those at a distance.
Bonow says it is marketing and distribution, not regulations, that have been her biggest challenge. "I had no knowledge of sales prior to doing this," she says. "I'm more of an introvert, and it took a lot of personal growth to get better."
She now does in-store demonstrations, interviews and social media, including Facebook and Instagram. She also works with a microbrewery and will soon be washing her cheese wheels with one of their brews.
Bonow plans to continue growing her herd and her sales and distribution. She plans to top out the herd at 50 head and concentrate on building demand to match the supply.
Bonow advises anyone interested in following her path to start small. "It is easy to burn out," she says. "Make sure you enjoy it, or you'll get sick of it pretty fast."