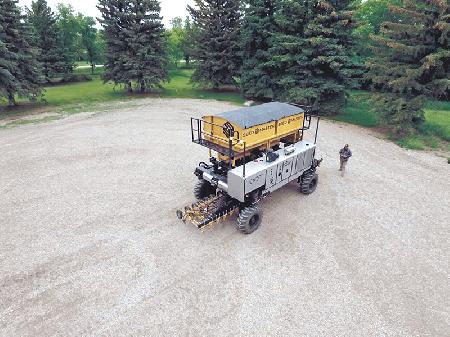 Saskatchewan inventor and manufacturer Norbert Beaujot is a big thinker.  Several years ago he started asking himself why everyone is trying to make tractors "driverless".  Instead, he thought, let's get rid of the tractor altogether.
According to a report in the Manitoba Cooperator, that's exactly what he's done. For the past 3 years Beaujot, who is the president of grain drill manufacturer SeedMaster, has been working on an autonomous "field implement platform" that eliminates the need for a big 4-WD tractor by essentially turning drills and other equipment into self-propelled units.
Beaujot says a big 500-hp. tractor uses about a third of its power just to move itself through the field and it needs to be weighted down to pull whatever is hitched behind.  With his power unit, the weight of seed and fertilizer - or whatever you're carrying - provides the traction needed.
The U-shaped machine has 4 hydrostatically-driven wheels.  It?s designed to slide right under and around big grain drills, sprayers, grain carts, and more, lifting them hydraulically into place on the frame. The computerized platform can be controlled by a remote operator or programmed with GPS to automatically work a field.  It shuts off automatically if it deviates from its planned path or runs into an obstacle.
Beaujot says the new system reduces the capital cost of equipment and saves both fuel and labor.  He plans to conduct field tests throughout 2017 and release it to a select number of farmers in 2018. For more information, go to www.seedmaster.ca.