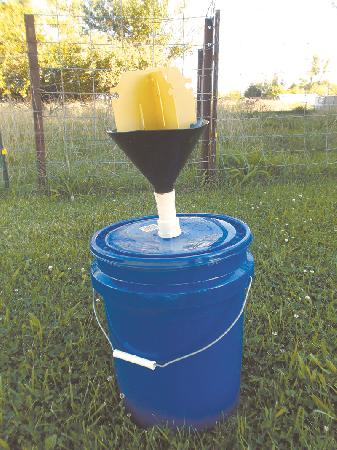 Like many other home gardeners and landscapers, Dave Taylor of Springfield, Missouri, purchased several Japanese beetle traps to place in his yard when he noticed the shiny shelled bugs starting to appear in droves.  But after having to empty the traps almost hourly throughout the day after their installation, he decided to build a trap that would hold far more beetles than the conventional bags. Now he collects the bugs in 5-gal. buckets.
Taylor's trap consists of a plastic bucket with a lid, a 1-in. pvc thread slip coupler, a metal threaded washer, a 3-in. section of 1- in. pvc pipe, a large funnel, and the beetle attractant that comes with store-bought traps.
To assemble the trap, a hole was drilled in the lid of the bucket to accommodate the coupler; the coupler was then secured with the large metal threaded washer, and the lid placed on the bucket.  Next, one end of the 3-in. section of pipe was heated to a pliable point, and slipped over the funnel spout, the pipe hardened as it cooled, forming a secure seal around the funnel.  The pipe and attached funnel were then inserted into the coupler on the bucket lid.  The last step was hot gluing the attractant to the funnel.
The Japanese Beetles are drawn to the attractant.  Once they land, they fall down the funnel and into the bucket, with no means of escape.  Once the bucket is full, Dave simply takes off the lid to dispose of the dead beetles and places the trap back in his yard.  The traps store easily for the winter, and the attractant can easily be replaced when needed.