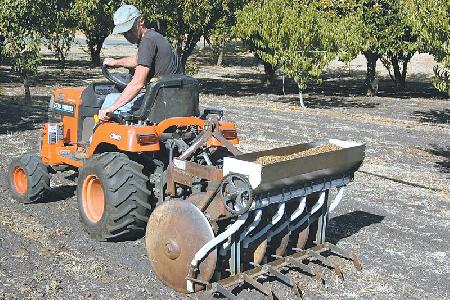 Bill Spurlock built his own disc drill as an alternative to broadcasting seed in his orchard. He plants a grass and legume mix in the fall to hold soil over winter and provide mulch in the spring. When he broadcast the seed, a lot of it was wasted.
"I used to cut shallow furrows in the orchard soil with a spring tooth harrow, broadcast the seed, and then drag it to cover the seed," says Spurlock.
He started out with a single front gang of an old disc harrow to reduce weight enough to use it with his compact Kubota BX1500 tractor. He also shortened and lowered the 3-pt. hitch, bringing the weight closer to the tractor.
He fabricated a seed hopper with 16-gauge steel sides and high-density poly ends, leaving about a 1-in. gap at the bottom of the hopper. Lengths of 3/4-in. angle iron bolt to the outside of the hopper to stiffen the sides and provide supports for Spurlock's seed metering system, a 2 1/2-in. pvc tube.
The heart of the metering system consists of 6 neoprene impellers from an outboard motor water pump, one for each of the disc blades. They are drilled and threaded to lock them to a 7/8-in. steel shaft. High-density polyethylene discs on each side of the impellers contain the seed between the impeller blades. Pvc pipe spacers hold the discs lightly against each impeller.
The entire shaft runs inside the pipe with the impellers just 1/8-in. smaller than the inside diameter of the pipe.
"I cut the discs out with a hole saw and then turned them for a light-press fit inside the pipe," says Spurlock. "I center drilled them for a free fit on the 7/8-in. shaft. They sit stationary inside the pipe and serve as bearings for the shaft, with the end discs fixed to the pvc pipe with screws to hold the shaft in place lengthwise."
Spurlock made manifolds out of three 2 1/2-in. pvc couplers. These carry the seed from the metering pipe to the tubes that run down to the planting nozzles. He cut 1-in. opposing holes in the center of each coupler, inserted 1-in. pvc couplers in the holes and glued them in place.
He used a 2 7/8-in. hole saw to trim the protruding 1-in. couplers and remove the stop ridge in the larger couplers. He then cut the 2 1/2-in. couplers down the center, creating 6 seed manifolds, each with a 1-in. outlet.
The pipe has round entry holes for seed and rectangular exit holes. The manifolds were placed over the exit holes and secured in place with hose clamps bolted to the angle irons at the bottom of the hopper. This positions the round entry holes facing the inside of the hopper.
Spurlock mounted a 5/8-in. "agitation" shaft through the ends of the hopper and just above the seed entry holes.  Both shafts are ground driven by a sprocket mounted on the disc gang shaft.
"I turned down one of the disc blade spacers to accept a small sprocket," explains Spurlock. "A chain runs from it to a large sprocket on the agitator shaft. A chain drive between matching sprockets on the 2 shafts is mounted on the opposite end of the hopper to drive the metering shaft."
As the impellers rotate, they sweep seeds into the manifold. Corrugated poly bilge hoses attached to the manifold outlets carry the seed to the planting nozzles.
"I heated and bent the end on 1-in., schedule 200 pvc pipe to create a 3/8-in. opening," says Spurlock. "The nozzles are mounted to a channel and angle iron frame. They drop the seed right into the groove cut by the disc blade."
Individual angled plates on hinged arms are mounted to the same frame. They float over the ground, covering the seed with dirt loosened by the discs. After seeding the orchard, Spurlock pulls a ring roller over the orchard to pack the seeds in.
"Using only one gang of an offset disc causes it to pull to one side, so on steeper slopes I seed in one direction with the discs pulling up hill," says Spurlock. "A box frame disc would be ideal, but my setup works for now. Depth control wheels might be added if used in softer soil, but it is about right for my dry, California soils."
To see more photos of Spurlock's home-built seed drill, visit the Farm Hack website. Farm Hack is a community of farmers and non-farmers of all ages who share their ideas.