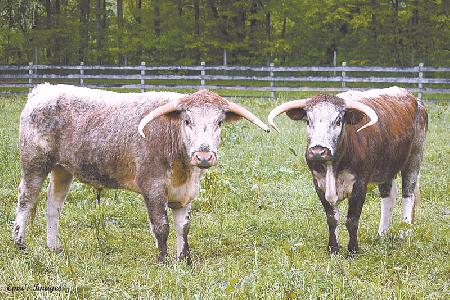 While Texas Longhorn cattle entered the U.S. through the Southwest, English Longhorn cattle landed in the East from England as early as the 17th Century. With horns that curve down around its face, the English Longhorn has unique characteristics that made it popular with early settlers.
But don't be surprised if you have never seen one or heard of them.  There are only about 40 of them in the U.S.
The main herd is in Virginia, and several others are part of the collection of heritage breeds at Conner Prairie in Fishers, Ind., a non-profit outdoor living history museum with educational and entertainment programs.
As livestock manager, Kevyn Miller is an enthusiastic supporter of preserving the English Longhorn and other rare, heritage breeds. Besides caring for the cattle, he has learned how to work with them and participate in 1836 reenactments using the steers to pull an oxcart.
"They were here in the 1600's to early 1800's. They did go extinct in the U.S. and were brought back as exotics," Miller explains. "We want to raise them and show what we started with. This was a multipurpose animal before we specialized."
Used for work, milk and meat, the breed is hardy and self-sufficient. Despite the threatening appearance of their horns, English Longhorns have an easy-going gentle nature and are very intelligent.
"I enjoy how smart they are " to keep up with them and train them. I have a hitch of four steers now. It's fun to figure how to communicate with them and to learn to be a better stockman," he says.
In addition to the steers, Conner Prairie has five cows, three crossbred heifers and a new full blood bull calf.
"It's an embryo calf " to get an embryo is a big deal. It's a new genetic line," Miller explains.
The breed shares common characteristics such as a brindle color and a white strip down the back.
Conner Prairie gives visitors the opportunity to see livestock breeds that were around when America was young and to learn about the changes in agriculture and livestock breeding since then, Miller says. There are about 100 head of livestock, including Ossabaw hogs, Tunis sheep and Arapawas goats. As the numbers of the animals grow, the center is setting up satellite farms interested in preserving the heritage breeds.
Since English Longhorn cattle numbers are so low, it may be a long time before that happens with them, however.
The best way to see them and learn about them is to visit Conner Prairie, Miller says. Check out the website for times and scheduled events.